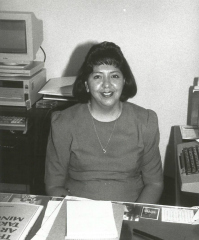 Cindy Laguna Dally was hired in May 1984 as an administrative assistant for the THC’s Texas Main Street Program, directed by Anice Read. In January 1985, she became the executive assistant to former THC Executive Director Curtis Tunnell. She left the agency in July 1995.

My position enabled me to receive the best education ever because I had the privilege to work with extremely bright individuals like Curtis Tunnell, Anice Read, Stan Graves, Bob Mallouf, Debbie Cottrell, Dan Utley, Roni Morales, and many more. My role allowed me to be involved not only in administrative functions, but it also exposed me to the legislative process. I learned from the best—Anice Read—about building relationships with legislative staff, the governor, the lieutenant governor, the Legislative Budget Board, and Comptroller staff, but the most important thing I learned was to think outside the box and be resourceful. These skills have served me well, and I owe my professional success to the THC.

My favorite memory is having the privilege to travel with Curtis Tunnell and learn about Texas history. I heard about his experiences as an archeologist and as a youngster growing up in Turkey, Texas. We would stop at the side of the road and he'd show Dan Utley and I how he picked cotton when he was growing up. I also enjoyed typing and reading all the oral histories he conducted, but the one that meant the most to me is when he went over to my mother's home. He and Nancy both interviewed my mother on how to make homemade tamales (which he loved to eat). He believed that everyone's cultural history was important.

The THC was like a second family. My daughter spent many afternoons running around the garden and swinging on the porch at the Carrington-Covert Home in Austin. It was a picturesque place to play. One of her favorite memories is when Curtis Tunnell prepared a special Native American tea for her to try. It must have been a successful introduction because she is a tea enthusiast to this day.

My eleven years at THC were exciting and educational. I had the unique opportunity to watch history being made such as the building of the State Capitol extension, proclamation signings with the governors of Texas, and an archeological dig in the Panhandle. I also feel privileged to have served THC commissioners such as Ted Fehrenbach, Karl Komatsu, Willie Lee Gay, Virgina Long, and many more. These commissioners and chairs are people who truly care about Texas history and have contributed to the State of Texas in so many ways.

Finally, I have attached a memo written by Curtis Tunnell to me on my last day of employment. He is truly the best boss I’ve ever had. I am so honored to have been a part of the THC. I remember Curtis saying “Texas got a bang for its buck” with the THC. Although we were a small agency with a tiny budget, we did outstanding work in Texas. I’m so proud of the THC—happy 60 years and cheers to 60 more!