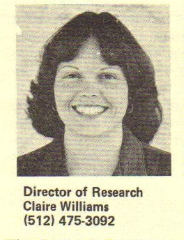 Claire Williams was employed by the THC from 1974–1982 in the historical marker program. She later spent 17 years as a volunteer and staff person with Habitat for Humanity in Georgia and Virginia. Married to Steve Martindale, Claire now works at her “retirement job” as office manager for two clinical psychologists.

During her tenure, she wrote this compelling presentation about the history of the historical marker program titled Commemorating Texas History: The Historical Marker Program (circa late 1970s).

“I joined the THC in the summer of 1974 to write the inscriptions for historical markers. Deolece Parmelee was my boss, as Director of Research, and I succeeded her in that position when she retired in 1979. Truett Latimer was Director of the THC when I came on board. I sat behind a partition in the upstairs hallway of the Carrington-Covert House and tapped out those inscriptions on an IBM Selectric typewriter. Later, after Dan Utley joined the department, we undertook to have all the marker inscriptions and research converted to microfiche to keep up with research standards of the day!

Working in the Carrington-Covert House and the other historic buildings in the THC complex was one of the great joys of my years there. The other was the incomparable host of friendships that continue to this day. Together, we on the THC staff had the privilege of helping countless local historians preserve and record the people, places, and events that shaped their corners of Texas. Doing research, attending marker dedications, and staffing local and state conferences took us to many places on and off the beaten path. One of my favorite memories was a visit to a remote part of a West Texas ranch where we encountered ranch hands drying rattlesnake jerky for a trail snack.

I left the THC at the end of 1982 to begin a career with Habitat for Humanity. Among other things, my years in the historical marker program trained me to write concisely and to convey the most information in a brief text. Those years also taught me to appreciate the value of state and local history in understanding the complexities woven through our historical narrative.

Twenty years after I left the THC, I was thrilled to be able to provide additional research and historic photographs for a marker application for the house my grandparents built in Austin’s Hyde Park neighborhood about 1911. I traveled from Virginia to attend the dedication of the Williams-Weigl House as a Recorded Texas Historic Landmark."