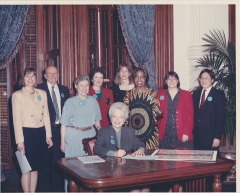 Cynthia Beeman began her THC career in 1987 as a historian in what was then the Marker Department, writing historical marker texts. Although her work involved all aspects of Texas history, she has maintained a particular interest in women’s history. Since her retirement from the THC in 2007, she has continued that work through publishing, speaking, and volunteer work with the Ruthe Winegarten Foundation for Texas Women’s History.

“At the time I was hired, there had been a statewide hiring freeze at state agencies, but the THC had somehow received permission to post the position, which had been vacant for some time. I remember when Frances Rickard interviewed me, she showed me a filing cabinet FULL of files—the backlog of marker applications waiting to have inscriptions written. I also remember it took me a solid year to write inscriptions for all those applications (and the additional ones approved in the meantime), and the sense of accomplishment our team—Frances, director of the marker program; Cindee Langdon, our office manager; and I—felt when we reached that milestone.

But my fondest memories of my early years at the THC have to do with the support and encouragement of the agency leadership—including  former executive director Curtis Tunnell, former chairman Karl Komatsu, and other commissioners—for me to devote time to coordinating statewide efforts to promote Texas women’s history and celebrate Women’s History Month. A large team of THC staff—including Debbie Cottrell, Frances Rickard, Cindee Langdon, Janie Headrick, Egina (Kaase) Siddall, Molly Godwin, Helen Simons, Roni Morales, Lin Altman, Lisa Harvell, Linda Roark, Marlene Casarez, Pat Mercado-Allinger, Lillie Thompson, Kit Neumann, and others (I’m sorry I don’t have a full list and I apologize for leaving out some names)—volunteered many hours to the cause, and we mounted some great events, including guest speakers and major exhibits in the Capitol Rotunda. We asked either the governor’s office or the legislature each year to issue official proclamations declaring March Texas Women’s History Month, which we then promoted to all the county historical commissions and other historical organizations around the state, many of which hosted their own events and celebrations in their local communities.”