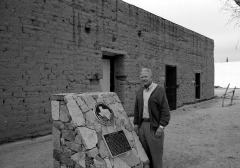 Frank W. Gorman, Jr. was appointed to the Texas Historical Commission (THC) in 1996, reappointed in 2001, and served as a commissioner until 2007. He was president of Gorman, Inc. from 1966–96. He is the past president of the Sun Bowl Association, the El Paso County Historical Society, and the New Mexico State University Foundation. He also served as director of the El Paso Chamber of Commerce and vice president of Historic Missions Restoration, Inc.

"Having been involved with the courthouse program from the beginning, my most memorable recollection was of a meeting in Austin where the various county judges were making a case for their individual courthouse needs, pointing out the terrible shape that their roof or plumbing or plaster, etc., were in—all with the idea of showing a truly urgent need so as to justify moving up on our list for funding. After five or six judges had made their presentations, the judge from Weatherford came before the panel and, looking right at me, said, 'You are going to reward all of these people for not doing their job and penalize me and my county for doing our job the way we are supposed to do it.' He went on to say that his county had been acting in a responsible way, repairing the roof when it needed it and taking care of the plumbing, etc., while these other people had not been acting responsibly. He, of course, was correct, but we had been charged by the legislature to help those courthouses most in need.

His words, however, stuck in my mind and I started thinking about the future and whether or not the courthouses that were funded would in fact be maintained in the future like they should be. Slowly, the idea developed that we had to have some type of follow-up effort to ensure that this would happen. This led to the stewardship program, which holds a workshop every year to teach and encourage the proper maintenance procedures for taking care of historic structures. Since there is no item in the THC budget to fund such training, it was necessary to seek outside, private funding. After being turned down by the State Bar Association for funding, I had lunch with [former Architecture Division Director] Stan Graves and [former THC Commissioner] Jane Barnhill to come up with other potential underwriters. As we considered what groups utilized the courthouse on a regular basis, title companies came to mind. To its distinct credit, the Texas Land Title Association accepted a significant civic responsibility and has generously funded the stewardship program since the beginning."

Interesting post - I enjoyed reading about this program's origins from Frank's perspective. Thanks for organizing this Memory Lane series!