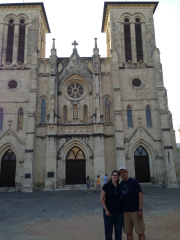 Hugo Gardea was an architect in the THC's Division of Architecture from February 1994 through November 1997. He was also the project manager for two building renovations in the Capitol complex, which are now used as THC offices (Elrose and Gethsemane Lutheran Church). He has been an architect in the Directorate of Public Works, Engineering Services Division, at Fort Bliss, Texas. Recently, he accepted the same position at White Sands Missile Range in New Mexico.

"[My first memory is] a trip to Del Rio with [former THC Executive Director] Curtis Tunnell and a few other THC staff. I don’t recall the purpose of our visit, but suspect it was to meet with park personnel. Anyhow, what would have otherwise been a three- or four-hour drive, ended up taking all day. We must have stopped along the road a dozen times, and each place Curtis knew like the back of his hand, recounting his earlier memories of the areas. I recall a quick stop in Brackettville to see the 'Alamo' reconstruction used in John Wayne’s movie. We eventually arrived at our hotel late into the evening after one of Curtis’ great tours of South-Central Texas. 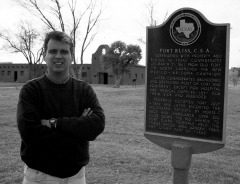 The second memory was a trip to Houston with [former THC project reviewer] Jamie Wise for a site visit to the Rice Hotel that was being rehabilitated for an investment tax credit. The building was in the early stages of work and portions of the interior were being gutted of their 1970s fabric, so much so that the interior elevator shafts were being used for trash chutes. The trip required a visit to the new roof being installed and, since there was no elevator, our choices were the stairs (18 floors) or the construction elevator mounted on the side of the building. Jamie wisely (no pun intended) chose the stairs, while I rode the elevator with the developer. It was a bumpy and jostling ride I don’t care to experience again, especially walking across the three-foot plank between the elevator and the building. I took the stairs down."

I am currently an archeologist and review coordinator with the Archeology Division of the THC, but I started with the THC in April of 1982 working for the then Antiquities Committee staff. One of my favorite memories is not an archeological adventure, but rather a field trip with one of the Architecture Division reviewers, Linda Roark. Linda and I went on an inspection of the "Main Unit" at the State Prison in Huntsville and had a fairly surreal experience walking among prisons while inspecting building and grounds conditions. Soon we were up on the fourth floor and about to go out a very small window onto the roof to inspect the conditions of the terracotta roof tiles. Being gentlemen, our guide (an officer) and I allowed Linda to exit the window first, but when Linda was three quarters of the way out the window, the officer suddenly screamed at Linda to come back in and he just as suddenly ran off. Just after I had assisted Linda back through the window the officer returned with a relieved look on his face, and he said we could now go back out through the window onto the roof because he had now informed the armed guards on the watch towers that authorized non-prisoners would be walking around on the roof, and they should not fire at us. Linda and I were understandably pleased to hear that this important point had been clarified, and I convinced Linda to still go first.