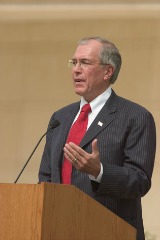 John Nau became a member of the Texas Historical Commission in 1993, and served as chairman from 1995–2009. He is president and CEO of Silver Eagle Distributors, the largest distributor of Anheuser-Busch products in the U.S., as well as founder and president of The Nau Foundation. Nau’s interest in history and historic preservation is strong. He has served as a board member for innumerable organizations, including the Friends of the THC, Admiral Nimitz Foundation, and the Texas State Historical Association. He was appointed by President George W. Bush to serve as chairman of the national Advisory Council on Historic Preservation from 2001–10, and currently serves as vice-chairman of the National Park Foundation Board of Directors and chairman emeritus of the Civil War Trust. Additionally, he is chairman of the capital campaign for the Nau Center for Texas Cultural Heritage, which is slated to open in downtown Houston in Fall 2016.

“[My first favorite memory], was early during my time as chairman. One Saturday morning, then-Executive Director Curtis Tunnel called almost yelling into the phone, 'We found it! We found it!' Since I’d been chairman for only 30 days or so, I didn’t realize we’d lost anything. Of course, it turned out to be La Belle. We built a cofferdam and proceeded to do a dry land recovery in the middle of Matagorda Bay. It provided me with a clear example of the quality of the staff at the THC through the work they did in finding and recovering La Belle. It also demonstrated to me the deep support for preservation in the community of Texas because more than 80 percent of the cost of the recovery came from private philanthropy. 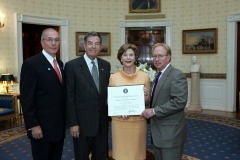 My second favorite memory was working with then-Vice Chair Shirley Caldwell to present and then sell Gov. George W. Bush on the Texas Historic Courthouse Preservation Program. What a great community building program the courthouse restoration effort became. Gov. Bush saw it after just our first two visits to the communities in which courthouses stood.

These two are not just my favorite memories, but they, along with the Texas Heritage Trails Program, showed the power and strength of the work of the THC.”

This is one in a series of “Memory Lane” blog posts in which former THC employees, commissioners, interns, and partners recall their favorite moments at the agency. It’s part of our “60 Years in 60 Days” campaign on Facebook and Twitter, which began on September 19 and leads up to November 17, the 60th anniversary of the THC.