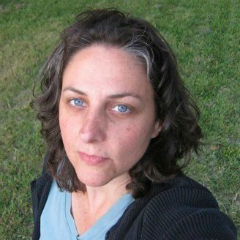 I was absolutely thrilled to join the THC’s History Programs Division staff in 2007, immediately after I completed my doctoral studies in landscape history. Texas and its history were new to me, and I enjoyed traveling throughout the state—which is easily like six states in one, it's so large and so complex—and immersing myself in its built environment. All my coworkers in the History Programs Division, especially National Register Coordinator Greg Smith, shared their knowledge and love of the state with me, and I truly enjoyed learning from them every day. As a landscape historian, I was particularly interested in the public parks and plazas in Texas communities of all sizes, and several of them remain particularly important to me. I was honored to work with talented historians Susan Allen Kline and Maria Watson Pfeiffer on National Register nominations for the Fort Worth Botanic Garden and San Antonio's Brackenridge Park, respectively. They did an excellent job in describing the current state of these gardens and parks and in documenting their complex and rich histories, and I know that residents of both cities will enjoy these important and beautiful places for decades to come.

The project I recall most fondly remains Heritage Park Plaza in Fort Worth, designed by the great landscape architect Lawrence Halprin in the early 1970s. Fort Worth is a city with beloved parks and plazas, such as the botanic garden already mentioned, or the spectacular Water Gardens designed by Philip Johnson. Tiny Heritage Park Plaza, however, suffered from a lack of popular use and maintenance over time, and in 2007 it was closed to the public. All over the country, concrete-heavy parks with sculptural water features are threatened cultural resources—Halprin's Skyline Park in Denver had already been half-demolished at this time. With the interest and support of Historic Fort Worth, Inc., the Cultural Landscape Foundation, and the regional offices of the National Trust for Historic Preservation, Heritage Park Plaza was determined to be eligible for listing in the National Register of Historic Places, despite its relatively young age. I worked with consultants Dwayne Jones and Michal Tincup on the nomination, preparing the statement of national significance for this late-modernist era landscape.

Happily, Heritage Park Plaza was listed in the National Register in May 2010, the first of Halprin's works to receive this recognition, outside of his Franklin Delano Roosevelt National Memorial. Since then, his Open Space Sequence of three parks in Portland, Oregon, was listed in the National Register in March 2013, and Paul Friedberg's Peavey Plaza in Minneapolis was listed in January 2013. Truly, I think that the listing of Heritage Park Plaza and the work to save it from threats of demolition made these more recent efforts possible, and we all have a group of dedicated Fort Worth residents to thank for that! Next up, the Fort Worth Water Gardens... I'm looking forward to that!