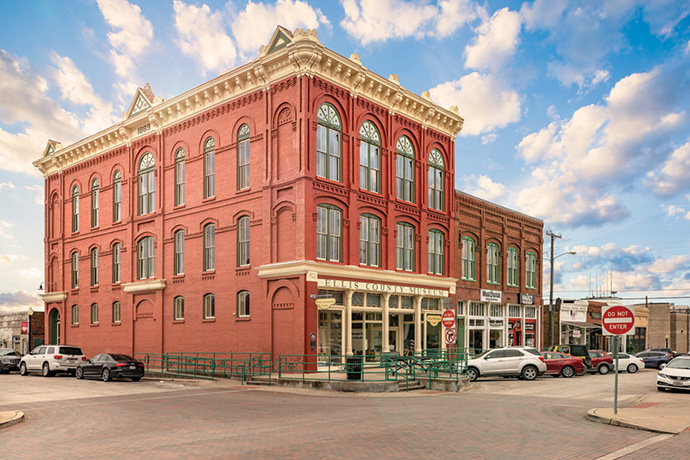 When attendees gather in Dallas for the national Main Street Now conference May 18–20, they’ll be surrounded by Main Street success stories. After getting their fill of inspiration from session speakers, visitors can experience the impressive spectrum of Metroplex Main Street communities—from urban neighborhoods to cities on sprawl’s edge to traditional historic downtowns.

Despite the size difference in the area’s cities-—Dallas has a population of nearly 2 million, while Royse City has 12,998 residents—there’s something special about walking down Main Street. Notice all the flags—on lamp posts, in front of municipal buildings, and displayed in residents’ windows—proudly representing America, Texas, and local schools. Also, regardless of the city’s size, most businesses on Main Street are homespun enterprises, from dry cleaners to restaurants to multi-story bank towers. And you’ll usually find pocket parks and benches for relaxing and absorbing the bustling scene.

Nearly 20 communities in the Dallas-Fort Worth Metroplex area participate in the Texas Historical Commission’s (THC) Texas Main Street Program. Conference attendees will have the opportunity to visit seven of them during mobile workshops or exploring on their own. The following pages highlight three cities—Dallas, Waxahachie, and Rockwall—representing different stages of Main Street’s growth while maintaining a distinctive sense of place as the heart of the community.

While downtown Dallas is currently not part of the Main Street program, it’s packed with historic and heritage-related destinations that make it the perfect setting for Main Street Now. Several field sessions will focus on the city’s unique architecture and history, including original land settlements in the West End, world-class collections in the Arts District, rehabilitation success stories on the tax credit tour, and the historic business district on the downtown architecture tour.

For conference attendees or those interested in visiting the city on their own, the following iconic buildings in the National Register-listed Dallas Downtown Historic District offer memorable places to sleep, eat, and explore. 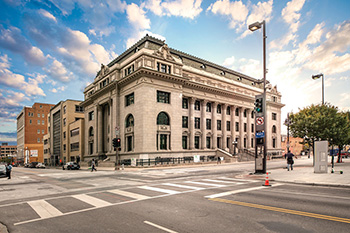 An affordable and appropriate home-base for heritage travelers is the Hilton Plaza Hotel, now a Hotel Indigo. This National Register-listed property, built in 1925 for Conrad Hilton, was the first to carry the Hilton name. The 14-story building features elaborate terra cotta details and was Hilton’s answer to the nearby Adolphus Hotel, offering comparatively modest accommodations for “the average man.” A bonus for history buffs: across the street is the Dallas Municipal Building, where John F. Kennedy assassin Lee Harvey Oswald was fatally shot by Jack Ruby in the basement garage.

Another historical option a block away is the 19-story Statler Dallas, which opened in 1956 as one of the largest hotels in the southwest. Its sleek mid-century modern aesthetic features an alluring angled shape. The Statler was named one of the National Trust’s Most Endangered Places in 2008 but was ultimately saved and redeveloped with the help of the THC’s Historic Preservation Tax Credits.

One of the most striking structures on Dallas’ Main Street is the 1903 Wilson Building. Listed in the National Register, this remarkable building was Texas’ first eight-story structure and is considered a monument to the success of local rancher and investor J.B. Wilson. Its adaptation of the French Renaissance style was proclaimed an architectural masterpiece at the time. Its ground floor now houses Porta Di Roma, a cozy Italian restaurant. 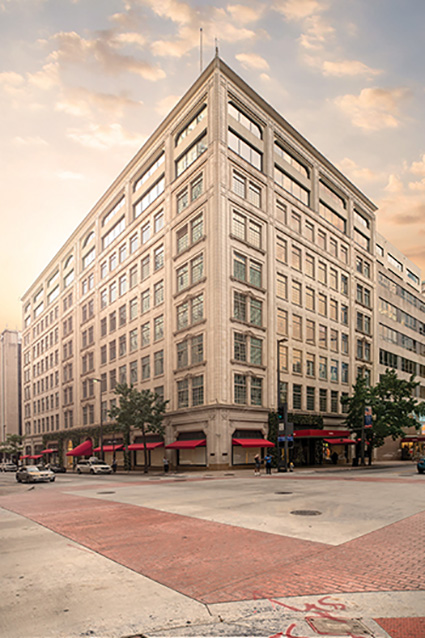 Across the street stands the original Neiman-Marcus department store, a popular shopping destination since 1914. Its THC historical marker notes that many of the innovations instituted here had a profound influence on similar retail businesses throughout the country.

Just down the block is the Busch-Kirby Building, a THC Recorded Texas Historic Landmark. Constructed in 1913 for beer magnate Adolphus Busch as a complementary facility for his Adolphus Hotel, the 17-story skyscraper features Gothic pinnacles and spires. The Adolphus, a block south of Main Street, is a 1912 architectural gem featuring faces carved on the stone exterior and an opulent lobby area with elaborate French Renaissance detailing.

Next door, the magnificent Magnolia Hotel is one of Dallas’ most treasured buildings. The 1922 Renaissance Revival-style structure originally housed the Magnolia Oil Company (later known as Mobil), and became a focal point of Texas’ oil industry. Note: visitors are welcome to explore any of these hotels’ lobbies to marvel at the ornate historic details and have a drink or meal at their comfortably elegant bars and restaurants.

A block west on Main Street is a completely different kind of historic skyscraper, One Main Place. This massive 33-story mixed-use skyscraper was constructed in 1968 and exemplifies the practical and linear aesthetic of late Modern architecture. A participant in the THC’s Historic Preservation Tax Credit Program, the building features an eye-catching waffle-patterned concrete and granite exterior and is listed in the National Register.

At the western edge of the district stands another feature found on Main Streets across the state: a historic courthouse. Known as “Old Red,” the 1892 Romanesque Revival building now serves as the Old Red Museum of Dallas County History & Culture. Be sure to notice the rich red sandstone exterior and neon-red Magnolia Petroleum sign that welcomes lobby visitors to this stunning building, partially restored through the THC’s Texas Historic Courthouse Preservation Program (THCPP).

A block north of Main Street is one of Dallas’ most-visited heritage attractions. The Sixth Floor Museum at Dealey Plaza places President John F. Kennedy’s legacy in historical context. The museum’s centerpiece is a Plexiglas-encased “sniper’s perch,” which recreates specific details (stacked book boxes, window frames, and paint colors) of the scene surrounding Lee Harvey Oswald when he fired the fatal shots from this exact location. 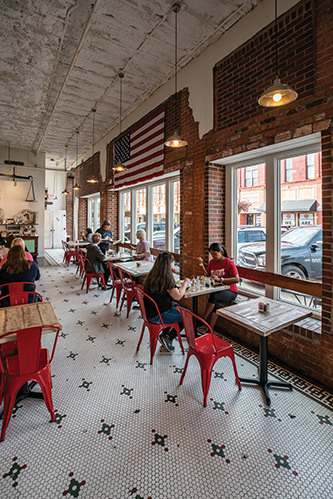 Thirty miles south of Dallas is Waxahachie, a quintessential Main Street community of circa 35,000 residents anchored by a magnificent courthouse square. The city was one of the first to participate in the Texas Main Street Program (1983–1990, recertified in 2002).

Waxahachie will be featured as one of Main Street Now’s field sessions, allowing visitors to experience a sampling of its nearly 300 structures listed in the National Register of Historic Places. It was named one of the Five Romantic Main Streets You’ll Adore by the National Trust in 2017 and is also home to one of the most-photographed historic courthouses in Texas.

The 1897 Ellis County Courthouse, restored through the THCPP, is certainly deserving of its acclaim. The nine-story, pink granite and red sandstone structure, designed in the Romanesque Revival style, is a true sight to behold—ornate nooks and crannies give way to massive architectural design features, and the entire castle-like element of the edifice is awe-inspiring. Be sure to step inside to see the ornate woodwork, intricate detailing, and bathroom converted from a former vault.

Across the street from the courthouse is the Ellis County Museum. Housed in a handsome 1889 Masonic temple, the museum contains exhibits depicting everyday life in the Waxahachie area from the mid-1880s to the early 1900s, including original wood signs from historic local businesses and an ancient metal optometrist’s chair that makes modern offices appear much more appealing.

Waxahachie is also known for its Gingerbread Trail Tour of Homes, which celebrates the city’s architectural legacy each June by showcasing Victorian-era houses with rich exterior detailing. One of the featured attractions is the 1902 Chautauqua Auditorium, an octagonal, 2,500-seat pavilion built in conjunction with the late-1800s adult education movement from Chautauqua, New York.

These types of heritage attractions play a major role in making Waxahachie a successful Main Street program. According to Anita Simpson, Waxahachie’s Main Street manager, the historic downtown district has created a robust environment of retail, restaurants, art, entertainment, and residences through collaboration and partnerships.

Among these groups are the Downtown Merchants Association, Historic Waxahachie, Inc., and other civic entities, including Ellis County. One of the most successful collaborations involved an agreement with the county to build a parking garage and shift government offices, resulting in a large area of downtown becoming available for new retail and restaurants—including the wonderful Farm Luck Soda Fountain.

“So much of the success we’ve experienced as a destination for travelers and new residents is based on our foundation of the Main Street program,” Simpson says. “You can’t do effective downtown revitalization without it. It provides the template for all the important steps you have to take.” 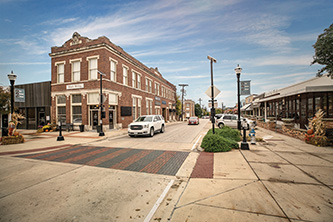 Twenty-five miles east of Dallas on the shores of Lake Ray Hubbard is the Main Street community of Rockwall, named for an underground geological formation discovered in the early 1850s. Rockwall has the distinction of being the seat of Texas’ smallest county, at 147 square miles, and is now one of the state’s fastest-growing counties. Known for its lake-based recreation and rapid development, Rockwall also boasts a charming Main Street district with several heritage attractions.

Anchoring the modest historic downtown is the Art Deco-style 1940 Rockwall County Courthouse, a WPA project that stands in stark contrast to the behemoth 2011 facility on nearby Interstate 30. The Rockwall County Historical Museum, located in the restored 1850 Manson-LaMoreaux-Hartman House, features artifacts and photos representing stories about area residents from the past 160 years.

“The program provides the framework for everything we do so we can just focus on moving forward,” Browning says. “It’s exciting to be a part of something like Main Street that affects so many people in such a positive way.”