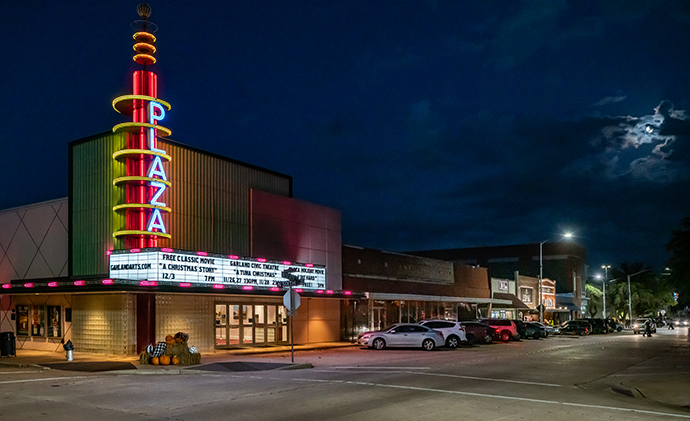 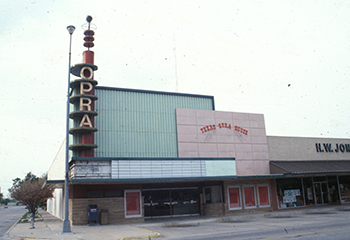 Established neighborhoods such as Oak Cliff, Lower Greenville, and University Park were expanding and thriving, while outer-edge communities like Garland were growing into their own cities. The Plaza Theater in Garland represented the Metroplex’s suburban shift—its Atomic Age neon spire served as a beacon to newly prosperous residents seeking a night of entertainment in a contemporary environment.

“The ambience of the structure is what makes it so special,” says Michelle Norris, Garland’s assistant director of cultural arts. “It reminds people about historic theaters and how the design can enhance the experience of attending a movie or show. We’re glad we can keep those memories going at the Plaza.”

Occupying a prominent corner of Garland’s downtown square, the building started as a hardware store in 1918 before it burned; it was reconstructed as a theater in 1941. Ten years later, its simple green facade was scrapped in favor of the current appearance, featuring stacked neon circles surrounding the venue’s name topped with an illuminated ball.

Like many American theaters, the Plaza lost customers and revenue to malls and multiplexes in the 1970s, although it hosted local country bands on its stage in the 1980s. By 1991, the roof fell into disrepair and the building was donated to the City of Garland, which coordinated planning and fundraising for its grand reopening in 2001. Since then, the 350-seat venue has been hosting movies and community theater performances.

“When I first saw this place, I was blown away,” says maintenance supervisor Markeef Fluellen, who has worked at the theater for nearly two decades. “It’s a big deal to have a nice place like this in our town—it’s a sensational experience going to a historic theater.” 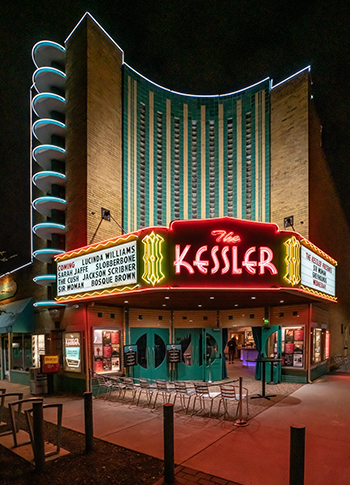 This stunning Midcentury Modern theater has extra star power: Its former owner is Gene Autry, the legendary “Singing Cowboy.” The Kessler dates to 1941; Autry bought the building in 1945 and had a successful run with it and several other Oak Cliff theaters in the area’s post-war heyday.

The Kessler’s days appeared to be numbered after two major disasters—a direct hit from a tornado in 1957 and a fire in 1962. Aside from hosting occasional church services, the theater was largely unoccupied until 2010, when it reopened in its current capacity as a mixed-use venue. The Kessler serves primarily as a live music stage for Americana, blues, and rock acts, but also hosts community events and art exhibits.

During rehabilitation, the new owner reportedly acquired several original theater seats by surprise during his online search for vintage equipment. They are currently reinstalled in the balcony. 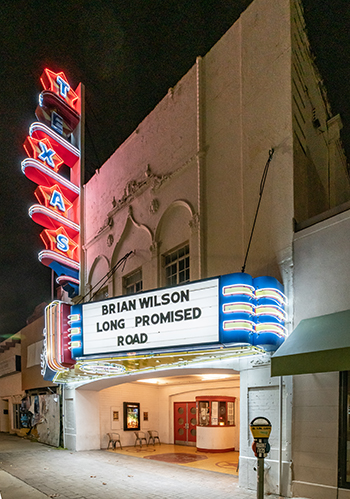 Constructed in 1931, the Texas Theater was the state’s largest suburban movie house when it was built. The “atmospheric theater” was a trend at the time, designed to enhance the exoticism of the movies with ornate artwork evoking outdoor spaces.

A year and a half after Kennedy’s November 1963 assassination, the Texas Theater received an extensive interior and exterior remodel, resulting in its Midcentury Modern distinction. Stucco, neon, and circular windows dominated the design. They remain the primary aesthetic, although some minor renovations were made by local firms Komatsu Architecture and Phoenix I
for the 1991 filming of Oliver Stone’s movie “JFK.” 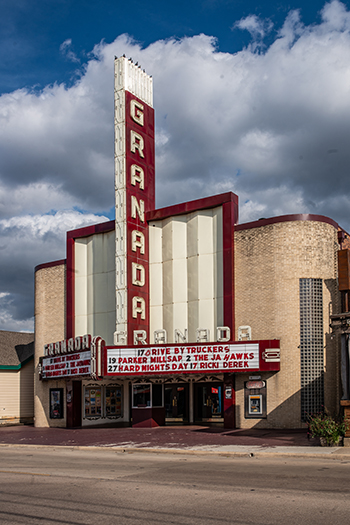 Located in Lower Greenville, the Granada Theater dates to 1946 and has experienced as many ups and downs as a veteran Hollywood actor. After opening, it operated as a popular first-run movie house in the booming suburbs. By the mid-1970s, it switched to an adult theater, which enraged local businesses and residents. A petition and police raids resulted in its shift back to a discount movie house.

Later in the decade, it was converted to a live-music venue, then back to a movie theater before closing for several years. It reopened in 2004 as a concert hall with renovations to its facade and original interior murals designed by artists who worked on the famous Grauman’s Chinese Theatre in Hollywood.

In its current capacity, the Granada hosts nearly 150 concerts annually with major touring acts ranging from Bob Dylan to Willie Nelson to Adele. 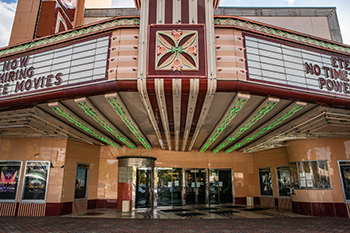 Another Metroplex Midcentury marvel is the Inwood Theatre off Lovers Lane in northern Dallas. It started as a standalone theater in 1947 and eventually became the centerpiece of a strip mall.

The Inwood was designed by H.F. Pettigrew, who created several aesthetically charming movie houses in Texas, including the Campus Theatre in Denton, Ridglea Theater in Fort Worth, and Queen Theatre in Bryan. Like other theaters, it experienced ups and downs as trends changed from single-screen neighborhood venues to multiplexes, but it stabilized in 2005 when an extensive rehabilitation brought the Inwood back to life.

Its neon sign and ornate murals were restored, and its popular martini bar continues to draw moviegoers and other patrons. Enhancing the lounge atmosphere is the addition of loveseats and ottomans, allowing guests to enjoy retro films in true Midcentury style.

To learn more about Midcentury Modern architecture in the region, visit the North Texas Chapter of Docomomo (Documentation and Conservation of the Modern Movement).