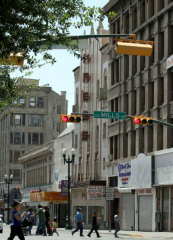 Downtown El Paso has a jaw-dropping collection of historic buildings. Look above the first-floor retail alterations and you’ll see untouched wood windows, intricate plasterwork, colorful tile, and strong masses of concrete and brick. Fine architecture was a point of personal and civic pride. This is the downtown that was and the downtown that could be. One building that has returned to its former glory is the Anson Mills Building.

“After seven days’ and nights’ travel, when I arrived at the bluffs overlooking the valley of the Rio Grande, I thought it was the most pleasant sight I had ever seen. When we drove into the town, which consisted of a ranch of some hundred and fifty acres in cultivation in beautiful grape, apple, apricot, pear, and peach orchards, watermelons, grain, wheat and corn, it seemed still more beautiful, especially when under the shade of the large cottonwood trees along the acequias (canals for irrigation) we saw Mexican girls selling fruits of all kinds grown on the opposite side of the river at what was known as Paso del Norte, a city of thirteen thousand people, controlled by well-to-do and educated Spaniards.” 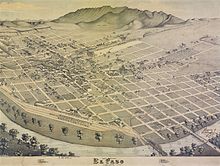 Anson Mills was just 23 years old when he first saw El Paso in 1858. Though Paso del Norte on the Mexican side of the river was a sizable and prosperous town, the Texas side consisted of a ranch and a post office bearing the name Franklin. Former West Point classmates were stationed at nearby Fort Bliss, and with their recommendation, Mills was appointed surveyor for the district. He platted the town and changed its name from Franklin to El Paso. By surveying the land for 200 miles south of El Paso and building homes and stagecoach stations, Mills was able to acquire his own land. But his rising fortunes changed when he voted against secession. He left for Washington, D.C., and didn’t see El Paso again for 20 years. 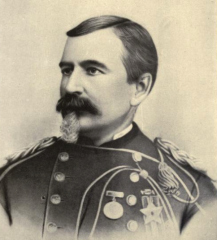 After fighting for the Union in the Civil War, Mills served in the Army throughout the West and the Great Plains, eventually rising to the rank of Brigadier General. He spent more than 50 years in the military, and was stationed at Fort Bliss several times. As Commissioner of the International Boundary Commission, he spent 20 years negotiating the Mexico-U.S. boundary of the ever-changing Rio Grande and advocated equitable distribution of water from the Colorado and New Mexico headwaters of the river. During his lifetime, El Paso grew from a bucolic ranch to a city of more than 50,000 people. 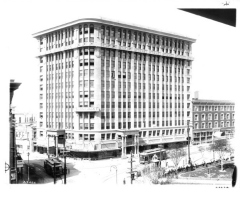 “By 1912 the only piece of property I had remaining in El Paso become so valuable that I tore down the two-story building then on it, and built a monolithic cement building twelve stories high, containing no steel beams, the concrete being held in place by steel rods interspersed thru the walls, columns, floor and roof. There is no wooden floor in the entire building from basement to turret, even the wash-boards in the rooms are made of cement and on all sides not exposed to parks the windows are fireproof. This was said to be the first building of the kind erected in the United States and, so far as I know, it is still the only one of that magnitude.”

Henry Trost was already a well-known architect in the Southwest when he came to El Paso in 1903. He joined his younger brother to found the firm of Trost & Trost. Other family members brought their talents to the firm, but Henry became the chief designer. He had spent about eight years working in Chicago during the heyday of Louis Sullivan and a young Frank Lloyd Wright, and their influences would become apparent in his prairie-style homes and highly ornamented exteriors. Just like Sullivan’s famous Carson Pirie Scott building, the plan of the Mills building followed the curve of the streets.

Trost embraced the modern technology of reinforced concrete. Though not his first concrete building in El Paso, he claimed the Anson Mills Building to be the “the tallest all-concrete building in the world” when it was completed in 1916. Certainly at 12 stories, it was the tallest in El Paso. Trost & Trost moved their offices to the Mills Building.

Trost went on to design the El Paso School of Mines (now the University of Texas-El Paso), El Paso High School, and numerous public and private buildings all across El Paso and the Southwest. Of the hundreds of buildings he designed, those in El Paso seem most threatened. Just last year, a Trost & Trost building was demolished a block away from the Mills Building. Happily, the Mills Building story continues. 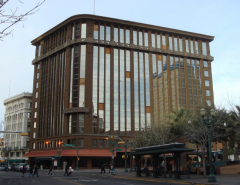 By 2007, the building was covered with dingy brown paint. Decades before, bronze mirrored glass windows had replaced the original windows, and those bronze windows were pockmarked with plywood covers. The interior of the building had been gutted by previous owners. Still, the remarkable 12-story concrete structure was in good condition. The owners of Mills Plaza Properties saw the potential of the building and recognized the possibility of using the Federal Historic Preservation Tax Incentives to rehabilitate it. 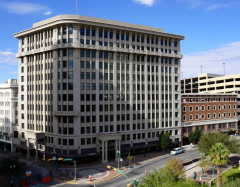 Now, new windows match the appearance of the original windows. A stair and elevator tower was built in the alley area. Large openings were cut along the walls on the entire western face of the building. An addition extended the full height of the building along the west side. An open-air passageway between the Mills and White House Department Store was enclosed for a new corridor. The parking and commercial structure adjacent to the Mills Building is based on the appearance of the St. Regis Hotel that occupied that location long ago. Additions are visible, but they are set back and on non-primary facades. The alterations and additions were necessary to make the building rentable and to generally revitalize it. The exterior was painted a light taupe, with a darker taupe for the accent color. The review and approval of the Federal Historic Preservation Tax Incentives was a 5 1/2-year process from Part 1 through Part 3. During the entire time, THC staff reviewed numerous amendments as work on the building progressed.

The Anson Mills Building now features the popular Anson 11 restaurant on the 1st and 2nd floors, with office tenants on the upper floors. It’s a fine example of how the tax credits can be used to rehabilitate historic buildings. “We are very proud of what we were able to do to bring back its original glory,” said Brent Harris of Mills Plaza Properties.

My compliments to you for your wonderful contribution. This was a great pleasure to read!