THC staff review the gamut of historic property types, from picturesque courthouses to modest farmsteads. Part of Texas’ heritage is our infrastructure—the systems that provide our road networks, power grids, industry, and support for our daily lives. These systems have a large effect on the design of neighborhoods, the success of businesses, and the shape of our communities. Although less understood, sometimes less accessible, and often less charming than the historic buildings we typically celebrate,  the THC wants to highlight stories from around the state and hear about the historic infrastructure in your community.

This edition of our new Infrastructure Intermission feature focuses on mining history. 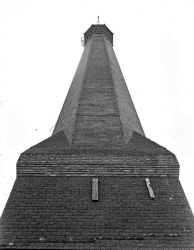 The name “Thurber” appears all over the state, stamped across the bricks used in streets and buildings. Now just a vestige of what it once was, Thurber at one time produced more than 80,000 bricks a day. Although known for its bricks, Thurber’s primary mining pursuit was coal. From 1888 until 1926, about five different shafts were operating at any given time, with 16 total shafts in the Thurber area.

After oil was discovered nearby and with the rising use of petroleum as a fuel source and component of road bases like asphalt, both the coal and brick operations declined. By 1938, Thurber was more or less a ghost town. Today this smokestack is one of few structures or buildings still remaining from the community’s heyday, and it is part of the National Register-listed Thurber Historic District. 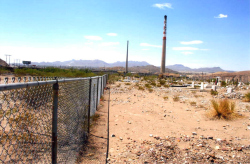 The smokestacks of the American Smelting and Refining Company (ASARCO) smelter were iconic landmarks in El Paso for almost a century. They represented the community’s industrial heritage, including the associated pollution and toxic conditions found around the plant site and La Esmelda, or Smeltertown, the workers’ community that grew up around the smelter. The controversy about the plant’s environmental effects, including the medical issues faced by its workers and their families, played out in courts between the early 1970s and late 1990s, and the plant ceased operations around the turn of the 21st century. The smokestacks came down in 2015, and only a cemetery and historical markers today represent what was a major component of the area’s development. Environmental justice concerns often go along with industrial history, such as with smelting operations. The full stories of these sites include workers’ experiences, engineering and technological innovations and practices, corporate history, and the laws that reflect the country’s ability and willingness to shape policy related to environmental impacts. 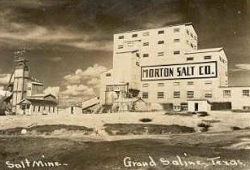 Given Texas’ wide range of land formations and soil types, it also has a rich mining history, much of which is found in ghost towns, such as Shafter (silver) and Terlingua (mercury). Many communities have museums and festivals where visitors can learn about their industrial heritage, such as Grand Saline, where the Morton Salt Company still operates an evaporative salt mine. Stay tuned for more Infrastructure Intermission stories, and feel free to share your own stories here about Texas’ mining history.