Castroville’s Landmark Inn State Historic Site is scheduled to re-open on December 5, 2015, and the site is buzzing with excitement as the construction crew moves into the latter stages of the renovations. While the infrastructure of the site is being repaired, Landmark Inn staff is busy working on operational improvements for the site. Besides offering a refreshed bed-and-breakfast experience, the site will also offer a host of new educational opportunities for visitors, perhaps the most important of which will be several new student programs highlighting the Landmark Inn’s history as a center of commerce and industry.

The industrial history of the site began in 1854 when John Vance sold the lower portion of his property along the Medina River to George L. Haass and Laurent Quintle, who soon constructed a dam, gristmill, and cotton gin. Local farmers now had a place nearby to grind their corn into meal and gin the seeds from their cotton bolls, rather than having to travel to San Antonio or beyond. 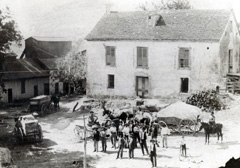 The site reached its peak after Joseph Courand bought the mill operation 1876 and installed special mill stones for grinding wheat into flour. With the addition of a sawmill soon thereafter, the facility could now process the four major local products: corn, cotton, wheat, and lumber. The mill processed more than one million pounds of corn meal and one thousand bales of cotton annually. The busy industrial portion of the site was known as “Castroville Mills” until the late 1920s, when Jordan T. Lawler bought the property and converted it to a hydroelectric power plant.

“From Gristmill to Power Plant,” a new program for the 2015–2016 academic year, will focus on the industrial history of the gristmill while incorporating STEM components into the lessons. Teachers will have the option of booking in-classroom workshops beginning in the fall of 2015 and on-site field trips in the spring of 2016. Teachers will also be happy to know that this program is designed to complement 2nd–7th grade TEKS. 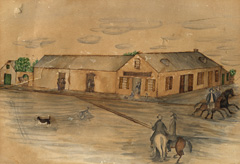 Besides being the industrial hub of Castroville, the site was also a center of commerce from the beginning. In 1849, Caesar Monod opened a small store and tavern catering to the needs of travelers along the Old San Antonio Road, which ran through the site. John Vance bought out Monod in 1853 and expanded the store, built a livery stable, added hotel rooms, and ran the town’s post office here for many years. Vance and Castroville prospered until the 1880s when a new railroad bypassed the town and business declined as traffic on the old road slowed down.

Much like the industrial side of the site, the Vance hotel and store was a sophisticated business that can provide students with many opportunities for learning. Another new student program, “Accounts and Ledgers,” will accordingly delve into the business of running a successful inn and store. Incorporating primary sources, such as store ledgers from the 1850s, students will learn about income, expenses, and lines of credit. This program will highlight TEKS in economics and financial literacy for 2nd and 7th grades.

We are already developing additional student programs that will incorporate other structures and historical aspects of the site, but these will take time to carefully plan and research. In 2017, students can expect a new living history program offered in the wash house and the detached kitchen that will focus on health and hygiene in the 19th century. Another planned program will involve the archeology of the historic site. Legacy programs from years past, such as Kid Fish and Pioneer Day, will be reintroduced as well. Students can also look forward to summer camps and spring break programs in the coming years.

We hope that these and other new programs will help make field trips to the Landmark Inn a regular component of lesson plans at schools in the region and beyond.

Hi Brandon,
This looks absolutely great...I will be sure to plan a visit to see you soon