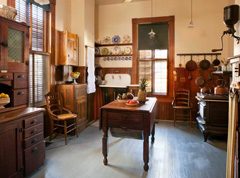 Maplecroft, the 1871 main house at Starr Family Home State Historic Site, will undergo the final stage of interior restoration beginning in 2015. Preservation work on the entire exterior of the house was completed in 2011, and interior finishes of the family’s rooms were also restored. Now, focus will be directed to the back of house—the kitchen building interior will be restored and interpreted as it was in the 1870s, and the breezeway connection will be restored to its configuration during the years the family first moved into the house.

Texas Historical Commission architects and site staff will work together to ensure the project is completed to current building codes, but with an interior resembling its original 19th-century appearance. Work will be slow, as staff will work methodically to remove decades of renovations completed at various times since the 1870s. As each layer is peeled away, staff must carefully document the changes and assess the structure’s condition to ensure the stability of the building and the health of current staff and future visitors. When the removal of the later additions has been completed, the painting, plastering, papering, and polishing will begin.

Constructed as a separate building behind the main house, the kitchen and cook’s room were originally connected to the main house only by a covered breezeway. The Starr family widened and enclosed the breezeway within a few years of its original construction, adding a room for storage and an open porch connecting the main back door and the kitchen building. Later, this area was reconfigured again to create a breakfast room (1940s) and display room (1960s) for the many objects collected on the family’s mid-20th century travels.

The kitchen is currently fitted with a stove and cabinetry that date to the 1960s, with a color scheme to match. Part of the kitchen was remodeled to create a bathroom in that part of the house. At that time, the original brick chimney was enclosed. When restoration is complete, the chimney will be exposed and a non-working 19th century stove with its accompanying stove pipe will be attached. Since kitchens were not considered public spaces in period homes, the new paint and fixtures will be utilitarian rather than decorative. The paint on the historic beadboard interior will be light gray, matching the historic first layer researched and documented in the interior paint analysis. In the 19th century, gray was used in kitchen areas to make the soot from the stove less noticeable. Appropriate items will be added to complete the tableau including braided rugs, an enameled cast iron sink, and examples of cookware from the late 19th century.

In its current state, the breezeway shows several different colors of paint with some of the old electrical wiring (called knob and tube) still attached to the wall and ceiling. All evidence of electrical wiring will be removed, as the interpretive period of Maplecroft reflects the pre-electric era. Approximately half of the current breezeway breakfast room will be enclosed to represent a small storage room, which was present there prior to 1947. Unlike 19th century conditions, all of the newly restored spaces will be climate controlled for artifact care and visitor comfort. 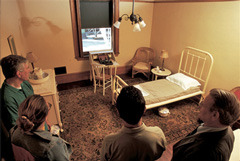 The cook’s quarters, attached to the kitchen, is a small square bedroom with a fireplace and two windows. Like the kitchen, servant’s quarters were considered utilitarian spaces, not visited by guests or family members. Their finishes would have been utilitarian for ease of cleaning. Generally, the plain servant’s rooms were equipped simple furnishings, often just a small bed, table or washstand, chair, and lamp. Inhabitants of the room might add personal touches such as curtains, quilts, and photographs—items not provided by their employer. The cook’s quarters at Maplecroft will be different than most, as evidence from family letters states the room was originally wallpapered. Remnants of this room’s historic wallpaper have been salvaged and will be used to guide the selection of new wallpaper to represent what was there originally.

When completed, the restoration of these rooms will create an opportunity to compare and contrast the lives of the Starr family and their contemporaries with the lives of the people who washed, cleaned, cooked, and gardened on their behalf. Guests will be able to experience the newly restored spaces on their own and will be encouraged to interact with and examine household objects. Accompanying smart phone apps will enable visitors to access information about the objects and learn about the people who lived here and worked in service to the Starr family.

This project will be a valuable addition to the interpretation of Starr Family Home and will help depict the often untold stories from 19th-century domestic life. If you would like to follow our progress during the restoration project, please like us on Facebook.