The milestones of LGBTQ+ literature are not the first thing that come to mind when one thinks of La Grange, Monument Hill, and the Kreische House. But that is just where one of the first English-language novels to depict lesbian love is set.

Norma Trist or Pure Carbon: A Story of the Inversion of the Sexes gives the modern reader not only a unique perspective on both assumptions and mores of the time but a literary description of the Kreische House, Monument Hill, and environs. 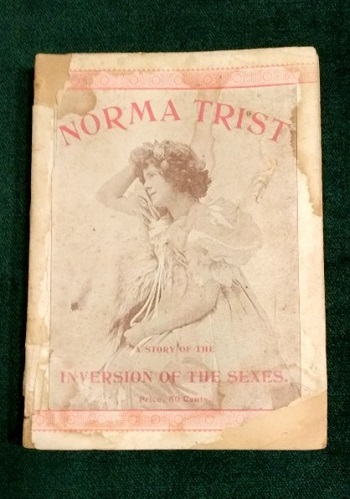 A clear product of its time, littered with racial stereotypes, cliches, and literary tropes, it also provides a surprisingly affirmative depiction of same-sex love between women. Norma Trist is at turns intimate, eccentric, and patronizing, allowing its lesbian protagonist to speak her truth while denying her right to live it.

Published in 1895, Norma Trist tells the story of a young woman, the eponymous Norma, who is passionately in love with her former music tutor, a young widow named Mrs. Marie LaMoreaux.

While Norma is away at school, Mrs. LaMoreaux becomes engaged to a Mexican cavalry officer. Upon returning home and learning this, Norma is consumed by jealousy and attempts to murder Marie on a public street. Norma is then remanded to the state mental asylum for observation where it was determined she was sane.

Interwoven into this tale of forbidden love and jealousy is a bizarre side adventure that finds Norma’s suitor searching for buried Spanish silver on the banks of the Colorado River.

Norma Trist’s author could well be described as a polymath. Not only a writer, John Wesley Carhart was also a minister, physician, and inventor. Born June 26, 1834, in New York State, Carhart was ordained as a Methodist minister at the age of 17.

He was made a Doctor of Divinity in 1861 and in 1883 received a medical doctorate. During this time, he married, published two books of poetry, and built a buggy powered by a steam engine. In 1885, Carhart and his family moved to Texas, ultimately setting up medical practices in San Antonio, Austin, and La Grange.

Carhart was, by all accounts, inspired to write Norma Trist by a real-life crime of passion. In 1892 in Memphis, Tennessee, Alice Mitchell murdered her lover, Freda Ward, after Freda’s family discovered their plans to run away together. Alice was found not guilty by reason of “present insanity” and died several years later in a mental institution.

As one can imagine, American society in the late nineteenth century did not look kindly upon non-heteronormative relationships. In 1893, a Texas doctor proposed the castration of “Insane Criminal or Sexual Perverts.”

He wrote, “In light of the Alice Mitchell case, it might be well enough to… asexualize all criminals of whatever class.” In that light, Carhart’s depiction of Norma is forthright and sympathetic for the period.

Norma continually contends that “Love between the sexes is natural—that is, God-given. My love for Marie is according to my nature; therefore, God-given and right.” At least, until she is hypnotized into her “happy ending.” Carhart leaves one to infer the explicit details of their relationship, but was clear that it was sexual, as seen in this passage:

“I wish to ask you, Norma, if, in your relations with Marie, your love experienced perfect satisfaction?”

“I have no hesitancy in answering frankly and freely, that my love for and relations with Marie afforded the highest and profoundest satisfaction of which the entire human being is capable in the realm of human love.”

Carhart is known to have taken some of Norma’s speeches from case studies and medical literature of the day.

Additionally, Carhart describes his author stand-in, Dr. Jasper, as having “given special attention to the subject of psycho-sexual abnormalities, as found in the older civilizations of Europe, and had made a personal study of a number of cases coming under his own observation in this country.” 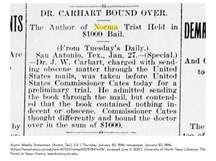 For his troubles, reviewers declared Norma Trist “a rash breach of propriety” and “an outrage upon decency,” and Carhart was arrested and charged with “sending obscene literature through the United States mails.” These charges were eventually dismissed.

Carhart chose to set his fictional tale of intersecting love triangles, lost treasure, and attempted murder in a familiar location: his new home. His view of La Grange, its community, and environs is that of an outsider who has come to know it personally.

Carhart’s descriptions of the house, brewery, and tomb of Texan soldiers killed in 1842 are tantalizingly intimate. Much of the action surrounding the buried treasure plot is set in what is now Kreische Brewery and Monument Hill State Historic Sites.

Of the tomb, Carhart says, “…the tomb, or mausoleum, on Monument Hill has been greatly neglected, and…had fallen somewhat into decay, so that stones in the masonry could be removed sufficiently to allow one to crawl into the tomb, which many persons had done, committing the vandalism of carrying off as souvenirs the bones of the noble men whose ashes rest there.”

This was indeed the case and would remain so until the new tomb and monument were constructed in 1933. 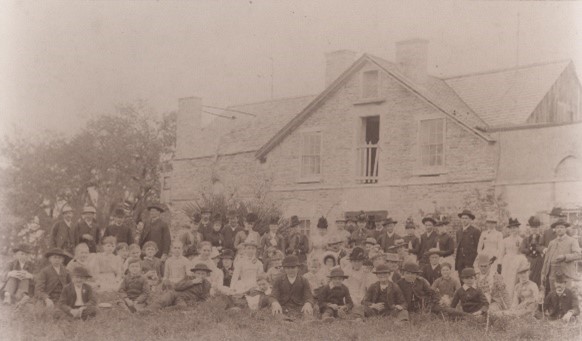 Carhart goes to great lengths to depict the Kreische House, which he only calls “the house of the whistling gable.” He spends six pages describing the “old manor house, resembling a German castle, such as were built in feudal times.”

All his descriptions make the house seem far older than it was at the time. In 1895, the oldest section of the house would only have been about 40 years old. He creates an ersatz Kreische family called the Glatzes to have built the brewery and inhabited the house.

They are largely described in past tense, with only a Glatz daughter appearing as a character described as an “ancient German maiden.”

However, the Kreische family, save Heinrich Kreische himself, were all alive and active in the Bluff Community when Norma Trist was written. The last of the Kreische children, Julia Kreische, did not pass away until 1952. Carhart likely wrote them out so he could place the reformed Norma with her newly rich husband in the home at the end of the novel.

Norma Trist is a fascinating time capsule. It shows us the reality of social views of the time while also providing us with a view of La Grange and Monument Hill as its author knew it in 1895. Carhart walks up to the edge of “love is love,” but that message is ultimately undercut by the need for a heteronormative ending Carhart’s contemporaries could accept.

These descriptions are a valuable resource for understanding this place and its people and contextualizing the landscape, if in a fictionalized setting.