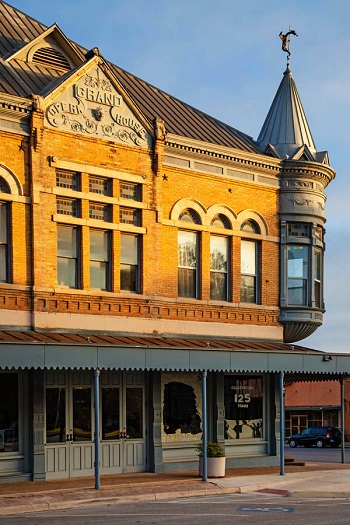 This article was originally featured in the October 2018 issue of Main Street Matters.

The Uvalde Grand Opera House was built in 1891 and is the second-oldest opera house in Texas. Rich with history and legend, the building has seen a vice president, state governor, two dragons, and even a few ghosts. Originally built by the Uvalde Real Estate and Building Company, the Opera House hosted balls and graduation ceremonies until the late 1800s, when they began to stage theatre and Vaudeville.

The building passed through several hands until 1917, when F.A. Piper sold the building to John Nance Garner. Garner had his office in the cupola room of the building, where he could see the layout of the town and all its activities.

Even when he served as U.S. vice president, Garner maintained his office at the Uvalde Opera House. In 1979, the Garner estate sold the opera house to the city of Uvalde for $10. It still belongs to and is maintained by the city.

One of the most interesting features of the opera house is the dragon gargoyle that sits atop the cupola window. Although there now stands a bronze replica, the original can be found in the lobby of the building.

Named the ‘Drunken Dragon,’ this character has an intriguing back story. Legend has that in 1891, when the architect B.F. Trister finished designing the opera house, he went out to celebrate and after a few drinks, he began to scribble on his plans. The scribbles were interpreted as a dragon, and so he was created!

After several decades of dedicated guardianship, he was brought down due to weather and bullet damage. The Grand Opera House is a cornerstone of downtown and is Uvalde’s second-oldest building still standing.

It turned 127 years old in August and sits at the corner of Uvalde’s main plaza area at the "crossroads of America." The two longest highways in the U.S., highways 90 and 83, intersect just a few yards away from its front doors.

The opera house has been featured the last few months on several “ghost hunters” television shows. “I haven’t seen any ghosts myself,” said Uvalde Main Street Manager Susan Rios, “but to hear the locals talk, it isn’t uncommon to see or hear them. All reports state they are friendly, watchful ghosts.”

Nurturing local art and performance is vital for downtown survival. Not only does it bring in audiences from afar, but it provides an opportunity for locals to invest in their own hometown. In order to grow, there must first be an interest from the people who will essentially be the builders. At the Uvalde Opera House, it is our mission to provide such an opportunity and to encourage a growth of culture and vibrancy in our downtown district.

Learn about upcoming events at the Uvalde Opera House.