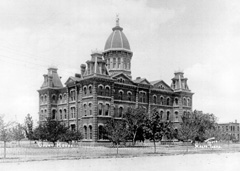 In Far West Texas, where artists and adventurers seek sparse, open spaces, a majestic building anchors the city of Marfa’s downtown. The Presidio County Courthouse with its elegant dome and tower is visible for miles along the high desert plain of the Marfa Plateau.

Designed by James H. Britton, the Second Empire style courthouse with Italianate details has been a centerpiece of the community since it was built in 1886, and square dances were even held in the courtroom. The building is often photographed by tourists, and visitors can walk through its elegant hall to view the intricate woodwork.

Restored through the Texas Historic Courthouse Preservation Program (THCPP) with a grant awarded in 2000, the courthouse was rededicated in January 2002. In spite of some significant alterations in the early 1900s, much of the building remained intact. It was listed in the National Register of Historic Places in 1977 after becoming a Recorded Texas Historical Landmark in 1975. It is also a State Antiquities Landmark (1981). 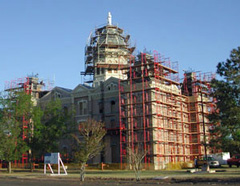 Goals for the courthouse restoration included returning the interior spaces and materials to their 1915 look and the exterior to its late-1920s appearance. In the interior, an ADA-compliant restroom was added to the first floor, and the second and third floor restrooms were upgraded. Damaged plaster on walls and ceilings was repaired or replaced, as needed. Existing wood floors were also repaired or replaced, as well as wood wainscot, trim, interior doors, and window frames. All new work was finished to match existing historic elements. The interior plumbing system and fixtures were completely replaced. A new fire and smoke detection system was installed and the elevator was renovated for state code compliance.

The exterior stucco was cleaned, repaired, and repainted after extensive color research. All exterior decorative metal was fully restored and the metal shingle roofs on the tower and mansards were completely replaced to match existing shingles. All windows and exterior doors were repaired or replaced.

Site repairs were limited to make the building more accessible and improve sidewalks and drainage. The lighting system was upgraded inside and out. 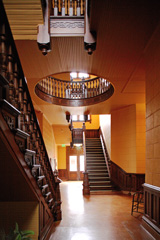 Today, the courthouse is just one of many attractions for travelers seeking a change of pace in Marfa, where a mix of arts, including the nearby Chinati Foundation’s contemporary art museum— housed in renovated historical buildings—special events, and restored or reconfigured historic structures attract visitors year-round. Yet something still remains from its early days: bullet holes in the scale held by the Lady of Justice on top of the courthouse, put there by a long-ago prisoner released on bond who claimed there is no justice in Presidio County.

View more images of the Presidio County courthouse in the photo gallery below. To read more about the history of the courthouse and find attractions in Marfa, visit the Texas Mountain Trail Region website.

The Texas Historical Commission (THC) is now accepting applications for the THCPP’s Round IX grant cycle through January 8, 2016. The program received a $20 million appropriation from the 84th Texas Legislature for the 2016–17 biennium.

Through matching grants, the THCPP helps preserve and restore Texas’ historic county courthouses to their original splendor and make them safe, functional, and a source of pride for Texas communities. To learn more about the benefits of restoring historic courthouses, download a free copy of the THC’s most recent Courthouse Cornerstones (PDF) or visit the THCPP online.