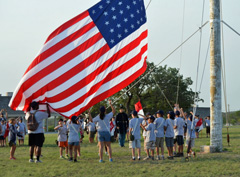 Last month, Fort McKavett State Historic Site, in conjunction with the Texas State Historical Association, once again hosted the Old Stories, New Voices Summer Camp. The weeklong camp hosted 54 students ranging in age from 9-12 from Austin, San Antonio, Junction, and Menard. During the course of the camp, students learned about the different groups of people that helped shape Texas’ history in the Fort McKavett area. 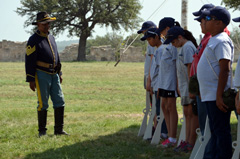 Old Stories, New Voices campers lived the life of soldiers at Fort McKavett, including learning to follow bugle calls, forming companies, sleeping in the barracks, and period drill. Every morning the companies of campers would stand in formation prior to raising the flag on the parade grounds and receive their orders of the day. 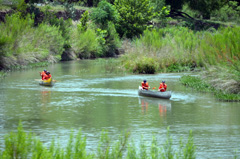 After breakfast, the campers began their day learning more about the respective groups—Native American, Hispanic, Buffalo Soldier, and Pioneer. They also took a canoe trip down the South Llano River. 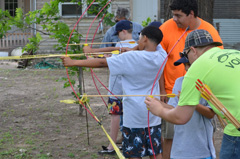 The campers rotated through four to five stations, learning more about the culture of the day at each stop. Some of the activities included: archery, “Shinny” (a Native American ball game), visiting Presidio de San Saba, learning to make tortillas and salsa, listening to a mariachi band, BB gun target practice, listening to the stories of Buffalo Soldiers, playing artifact bingo, and learning about frontier life. 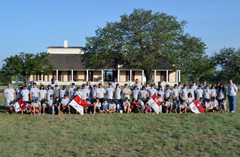 The week ended with an award ceremony before the campers traveled to Fredericksburg to visit the National Museum of the Pacific War and then on to Austin and San Antonio.