The year 2015 has already been a busy one at the Sam Rayburn House Museum. The museum recently hosted two open house celebrations—one to commemorate the 133rd birthday of Sam Rayburn and the other to commemorate Black History Month.

During the Sam Rayburn Day celebration, tours of the home focused on how Sam Rayburn celebrated his birthday during the 1950s. One especially festive birthday for “Mr. Sam” was that of his 70th birthday, on January 6, 1952. Typically, his birthday fell near the start of each Congressional session. With a 48-year career as a U.S. Congressman, that meant Rayburn spent most of his birthdays at work in Washington, D.C., beginning with his election to Congress in 1912 and continuing until his death in 1961. 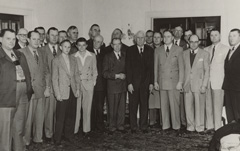 In 1952, however, Congress reconvened for the second session of the 82nd Congress on January 8. Therefore, Rayburn had the opportunity to be at home in Bonham for his 70th birthday. His sisters Lucinda Rayburn and Kate Thomas along with his brothers Dick and Tom Rayburn hosted a birthday luncheon for Rayburn at his home. After the luncheon, a group of 20 friends from the Bonham area convened at the Rayburn home to present Rayburn with a Browning over-and-under double-barrel shotgun as a birthday gift. The visits by friends, family, and voters continued throughout the day as the phone chimed regularly with callers offering well-wishes. Even the Bonham post office and Western Union telegraph office were kept busy with correspondence to Rayburn on his 70th birthday.

The Sam Rayburn House Museum also commemorated Black History Month by celebrating Charlie and Bobbie Phillips, the African American husband and wife who worked and lived at the Rayburn home.

Charlie Phillips was the Rayburn’s groundskeeper beginning in 1939. Charlie’s duties on the farm included more than just tending the property. His workload consisted of tending the garden, milking cattle, plowing the cotton fields, chopping wood, repairing and constructing outbuildings, threshing, butchering, going to Bonham for supplies and errands, and assisting with serving meals during formal events at the home. 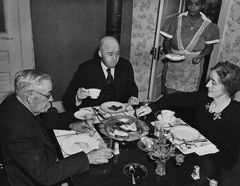 Bobbie began working at the Rayburn home around the year 1933. She married Charlie in 1940 and together they lived in the caretaker’s cottage on the Rayburn property. A reproduction of the cottage is located to the south of the main home on the property today. Bobbie was beloved by the Rayburn family and friends, being especially close to Sam Rayburn’s sister, Lucinda. Because she was such an expert cook, Bobbie rarely needed a recipe or cookbook when preparing the delicious meals and desserts that made her so famous among all who sampled her cooking.