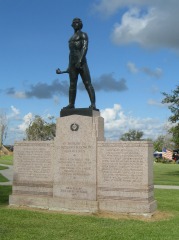 The Battle of Sabine Pass was considered one of the Confederate Army’s most successful maritime victories of the Civil War. Sabine Pass Battleground—now one of the Texas Historical Commission’s (THC) 20 state historic sites—recently received several interpretive upgrades to help better tell the real stories of this real place in Texas history.

In September 1863, Union forces, attempting to secure access to railroads and valuable cotton-shipping routes in southeast Texas, sent four gunboats up Sabine Pass to land troops just a few miles north of where the Sabine River empties into the Gulf of Mexico. On the day of the battle, United States Navy Captain Frederick Crocker entered the Sabine River with four gunboats, accompanied by 18 troop transports containing some 5,000 federal infantrymen. The Confederate forces, under the command of Lt. Richard Dowling, consisted of approximately 40 men armed with
six mounted cannons.

Despite these odds, the Confederate troops fired on the advancing gunboats with impressive accuracy, resulting in a fatal explosion from a direct hit to the boiler of the USS Sachem, and causing the USS Clifton to run aground. By the end of the battle, Dowling’s men, primarily consisting of the Davis Guards of the First Texas Heavy Artillery Regiment, had captured 300 Union prisoners and two gunboats.

“It’s a truly significant story—the Confederates were severely outnumbered yet they remained dedicated to their cause and secured an unexpected victory,” says Brett Cruse, sites supervisor with the THC’s Historic Sites Division. “It represents an important Civil War conflict in Texas, so we’re proud to tell that story and interpret the battle site.” 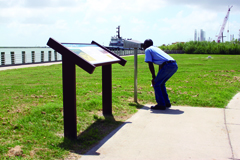 New visitor information at the site includes a cell phone tour and a pavilion exhibit with 11 interpretive panels describing events leading up to the battle, the battle action, and the site’s significance in context with other Civil War events. Also added were two “scopes,” allowing visitors to locate the Sabine Pass Lighthouse on the other side of the river, and see what the battle would have looked like through custom artwork superimposed on the existing river view.

In addition, a 1:10 scale model of the Confederate fort, Fort Griffin, now sits near its original location, giving visitors an understanding of the battle position and action, including the location of Union ships in the river. Also, eight THC markers damaged in 2008 by Hurricane Ike were refinished and reinstalled. 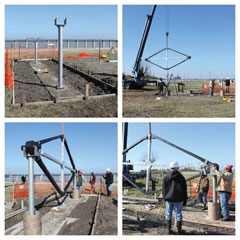 In January of this year, another significant remnant of Sabine Pass’ history was added to the site. The Clifton’s “walking beam,” a rare maritime artifact that assisted with propelling the ship’s paddlewheel, was permanently installed on the grounds. After the Clifton wrecked in 1864, the walking beam was a visible landmark in the water until it was removed in 1911 and installed in a Beaumont park. In 2011, the walking beam was acquired by the THC before undergoing an extensive conservation process.

Sabine Pass Battleground is open year-round and offers free admission. Visitors can learn about this significant aspect of Texas history while enjoying the waterfront view, fishing, picnicking, and birding.