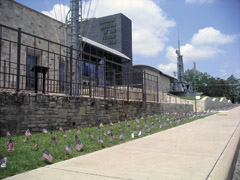 There’s only one institution in the continental U.S. dedicated exclusively to the Pacific Theater battles of World War II, and it’s near some of Texas’ biggest cities in one of the most scenic and welcoming destinations in the Lone Star State.

Centrally located in Fredericksburg, the National Museum of the Pacific War—one of 20 historic sites administered by the Texas Historical Commission (THC)—honors the dramatic, exciting, and tragic stories associated with this significant portion of World War II, which ended 70 years ago this August.

The National Museum of the Pacific War was originally known as the Admiral Nimitz Museum, named after Fredericksburg native Chester Nimitz, one of the most respected leaders of World War II’s Pacific campaign. As fleet admiral, Nimitz built an aggressive combat team and led U.S. forces at the Battle of Midway, considered the U.S. Navy’s greatest victory.

The site’s historic hub is known as the Admiral Nimitz Museum, where the original Pacific War Museum was located before the facilities expanded to include three museums on a six-acre campus. A landmark in Fredericksburg since the late 1800s, the building was the old Nimitz Steamboat Hotel, owned and operated by Admiral Nimitz’s grandfather Charles Henry Nimitz Sr., and the admiral’s childhood home.

In 2009, the museum added the George H.W. Bush Gallery. The gallery features media installations, nearly 1,000 artifacts, and hundreds of historic photographs. It demonstrates that the Pacific Theater was not a sideshow to the war in Europe, but a conflict that itself affected the course of world history.

The original portion of the museum features artifacts, equipment, and models related to the Pacific campaign, including a B-25 bomber, battleship artillery, a submarine, and an impressive collection of uniforms, weapons, and scale-model destroyers and aircraft carriers. Elaborate walk-through dioramas bring the island combat scenes dramatically to life.

Outside the exhibit halls lie a memorial courtyard honoring World War II veterans, a Plaza of Presidents dedicated to the 10 commanders-in-chief who served in the war, and the Japanese Garden of Peace, an inviting natural sanctuary containing the three basic elements in a traditional Japanese garden: stone, plants, and water. The garden was a gift to the American people from Japanese military leaders, who held Admiral Nimitz in high regard. 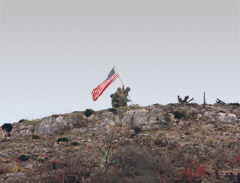 The National Museum of the Pacific War will soon host one of its most popular annual activities: a World War II battle reenactment featuring uniformed actors, guns, tanks, and a flamethrower. This year’s events will be held September 5 and 6 (11 a.m. and 2 p.m.) at the museum’s Pacific Combat Zone. Online reservations are recommended.

Another special World War II-related event, opening on October 17, is the exhibit Tom Lea: Life & WWII. Lea, an influential El Paso artist and novelist, was a war correspondent for Life magazine. The museum will showcase dozens of his paintings and works on paper until January 16, 2016.

This article was originally published in the Spring 2015 issue of The Medallion.