Pan de Campo: Exploring the Tejano Origins of the State Bread of Texas 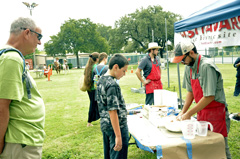 South Texas is recognized as a culturally and geographically distinct region of the greater Southwest due to its long history as a homeland for indigenous, Spanish, and Mexican populations. Self-sufficient practices have been key to the survival of these populations. At the forefront of these activities were Tejano families living and working on ranchos that relied largely on the planting and harvesting of crops as well as raising cattle and livestock as a source of food and income. 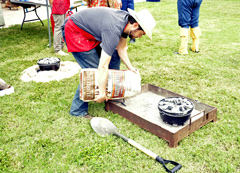 When tending to cattle on South Texas ranchos, vaqueros typically cooked pan de campo, also known as camp bread, using a Dutch oven heated by mesquite coals. The simple recipe consisting of flour, baking powder, salt, fat, and water baked quickly and was eaten with dried meat, beans, corn, peppers, eggs, and wild game. The hard exterior of the bread and soft interior made it especially portable and ensured its longevity in the arid climate. 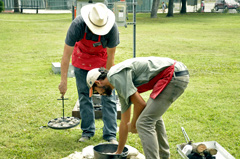 In the 19th and 20th centuries, pan de campo was prepared for ferias, or festivals, in South Texas. Pan de campo was designated as the State Bread of Texas in 2005 largely due to the growth in size and popularity of the Pan de Campo Cookoff and Festival, which had been held in San Diego since 1978. The festival was modeled after the turn-of-the-century festival known as “Feria de San Diego,” and, like its predecessor, celebrated the food, music, and culture of South Texas. 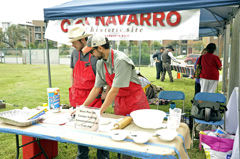 Kicking off Hispanic Heritage Month, Casa Navarro staff and volunteers baked and provided samples of pan de campo at the University of Texas at San Antonio’s (UTSA) Institute of Texan Cultures for Tejano Ranching Day. The free event provided 550 visitors with the opportunity to see how pan de campo was traditionally baked and to understand its role in the history and culture of Texas.

All photos courtesy of UTSA’s Institute of Texan Cultures.

Good article. As former mayor of San Diego and a blogger about Duval County history (http://soydeduval.blogspot.com/) I enjoyed see our cultural contributions being appreciated.

i would like a recipe for pan de campo. I have seen one that calls for evaporated milk.

Rosie, thank you for your interest in the Pan de Campo recipe I use. Would you mind emailing me at nano.calderon@thc.texas.gov about the recipe, I wouldn't want to give away all my baking secrets online! Many thanks - NC

Would you please send me the recipe for the pan de campo? I believe my grandmother use to make it, but there was no recipe to be found. Would that be too much of a bother?
Thank you.

Thanks for getting in touch. Please email nano.calderon@thc.texas.gov for the pan de campo recipe.

Hello. Can you please send me a copy of your famous recipe for pan de campo. I would really appreciate your help. Thanks, God Bless You and Family.

We've passed your request along to the author, who will email you the recipe.