Paths of Plants and People

It is a comfort in uncertain times to know that some things are certain. Recognizing ideas and beliefs that are universal creates unity among communities, easing feelings of isolation and fear. All the wild, beautiful, and sometimes unruly plants growing around us offer comfort through universal themes.

Did you know, that no matter what your creation stories are, that it is certain that plants were here before people? Besides touch, healing with plants is the oldest method of treating what ails us.

Just like people, there are plants that are indigenous to the piney woods and the Mound prairie, here from very early times to offer food and medicine to many generations of Texans.

There are also plants that traveled with the Spanish and French from their homes to ours, plants shared by Anglos and other Native American groups who moved through this area, and new “invasive” plants still being introduced. 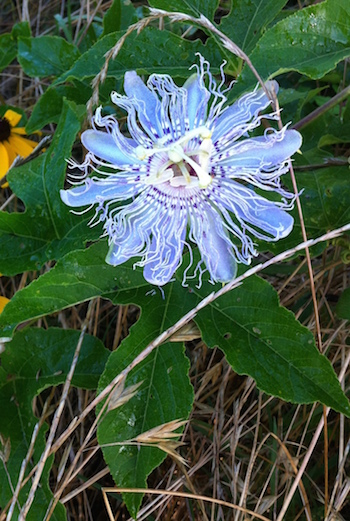 Have you ever wandered East Texas fields and smelled the fragrance of passion flowers (also known as maypops), marveled at their exotic flowers, heard the “pop” of the fruit when you stepped on it, chewed maypop seeds, or had a cup of passion flower tea? Passiflora incarnata is one of our wonderful Texas natives.

Passion flower tea is a great plant ally for our time, helping to ease anxiety and aiding those who suffer from sleepless nights.

I’m willing to bet that you spend quite a bit of time pulling chickweed from your gardens and potted plants at the start of your spring gardening. Did you know that chickweed, Stellaria media, traveled to this country with the French as a valued part of their salad gardens?

Next time you go to “weed” the chickweed from your tended spaces, think about “harvesting” it instead. There are a variety of ways that chickweed is used as food and medicine. Added to salves, it is soothing to the skin. Added to olive oil, parmesan cheese, and nuts it makes a delicious pesto.

I must admit that my pesto never has exactly the same ingredients. I vary nuts and use a variety of wild greens and basil.

Blend the following in a food processor.

You have most likely seen mullein’s tall spires of little yellow flowers cropping up in pastures and along roads. Maybe you’ve marveled at mullein’s big velvety leaves, or even been told that its other name is “hunter’s friend” because of it’s possible use as camp toilet paper.*

By the 1800s, this plant brought by Europeans was so common across what is now the United States that many believed it to be native to this land. Mullein flowers are prized in oil or alcohol as a remedy for earaches. The leaves, dried for tea, are an ally to the respiratory system. This earthy tasting plant can be brewed up into a tasty chai, a helpful tonic for the lungs. 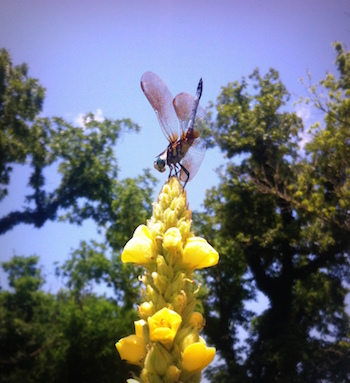 Make a quart of spiced milk by gently warming one quart milk with 1 cinnamon stick, 6 cloves, a little mace or nutmeg, and a vanilla bean or a slice of ginger. Optionally, use a teaspoon powdered cinnamon, half a teaspoon of powdered ginger, a dash of powdered cloves, and a dash of nutmeg. Let cool, then refrigerate without straining. Leave spices in the milk.

There are many opportunities throughout the year to join us at Caddo Mounds State Historic Site in Alto for herb walks, plant dye classes, wild salad foraging, and more.

Check out the work of some of the foragers, herbalists, and horticulturalists who teach at Caddo Mounds:

*Be careful if you test out the nature’s toilet paper idea. Small hairs on the leaves seem soft, but could be irritating to sensitive skin. Test by rubbing a leaf on the inner part of your arm and see if you react.