Picture Postcards Offer Fascinating Look at Our Past 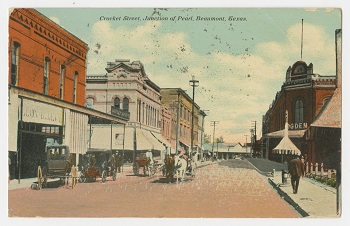 Three years after the U.S. Postal Service authorized the use of picture postcards in 1898, and well before the days of the long-distance telephone call, Americans were sending millions of cards to friends and family members across the country.

The golden age of picture postcards, which peaked around 1915, became a firmly established tradition that continues today.

Originally serving a need to communicate, old postcards have long been novelty items sought by collectors and hobbyists. But, while early postcards offer a bit of nostalgia, they also are historical records of places, events, buildings, and the evolution of our culture. Sometimes, a picture postcard is the only available visual source of historic information. 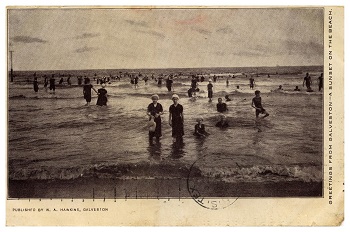 Moreover, postcards are available virtually to anyone who cares to comb through tabletops full of cards at book and paper shows and flea markets. Collectors pay anywhere from 50 cents to $30 or more apiece for cards to fit their special collection themes, including bridges, dams, depots, farm implements, courthouses, and hurricane aftermaths.

Don Kelly, executive director of the South East Texas Regional Planning Commission in Port Arthur, has about 1,000 postcards depicting scenes from a tri-county area for which his office is responsible. Otherwise known as “The Golden Triangle,” the territory consists of Orange, Jefferson, and Hardin counties. Kelly’s collection, which includes early 1900s scenes of Port Arthur, Port Neches, Saratoga, Orange, Bateson, and Beaumont, has been featured in several public exhibits.

“I’m interested in the future,” Kelly said. “You have to have a sense of the past—how the area develops—to get to the future. People think public works projects come about automatically. Postcards show ideas that have been tried already.”

One example of an idea that’s been considered before is the recreational use of Pleasure Island, a man-made barrier island off shore from Port Arthur. It was pictured on a 1915 postcard as an idealized recreation facility. The city of Port Arthur today again has plans to develop the island with a golf course and gambling facility.

Postcard messages are important, too. Many Texas postcards were produced during the early 1900s, a big growth period when visitors and industry poured into Texas. Postcard messages during this time, for Kelly, offer a more accurate idea of area attractions. “They convey in a crystalized form people’s impressions of an area,” he said. “This is historically important to understand because people wrote what they thought was more meaningful."

One early visitor to Beaumont, for example, wrote: “I stopped and gave Beaumont the once over; a pleasant town, interested only in getting money.” A visitor to Lubbock in 1910 sent a picture postcard of vegetables and wrote: “Lubbock is a great place; everybody’s getting rich! Love, Elmer.” 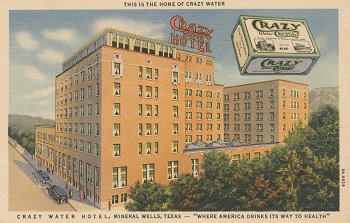 Kelly’s postcard collection has been displayed many times in area museums and in the Sam Houston Regional Library and Research Center in Liberty. Recently, Kelly donated his collection to the Center, which is now cataloging it.

For Janet Valenza, who is a doctoral candidate in Geography at the University of Texas at Austin, postcards are more than a hobby. Her collection is specialized to include buildings and landscapes associated with late 19th- and early 20th-century Texas mineral springs and health resorts. Many of the dozens of spas and surrounding structures pictured in her postcard collection have been demolished or destroyed by fire.

They, like many Texas buildings, exist only in the memory of a few individuals and in postcard collections. Valenza is also interested in the relation of people to a geographic place; this is revealed in the picture and sometimes in the message on the card. One card from a spa in Marlin for example, reads: “Dear ones, got here Sunday. Having swell time. Drank some water last night oh my oh my.”

Books of postcard collections on Houston, Amarillo, Dallas, and Corpus Christi have been published recently. Pages of color reproductions are accompanied by historical and anecdotal notes for each card. Anita Eisenhauer, historian and co-author of Corpus Christi: A Picture Postcard History (1987), sees postcards as valuable tools to show us cultural changes, such as styles of dress in town or at the beach. People enjoy viewing postcards in a family setting, too, according to Eisenhauer. “It draws out memories; it’s a good chance to get the family to talk about the past. You never know what buttons it’s going to punch.”

Several picture postcards books have been published. Among them are: