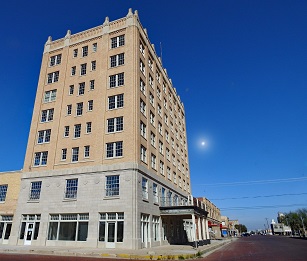 “Let me tell you the secret that has led me to my goal—my strength lies solely in my tenacity.” ~ Louis Pasteur

Conrad Lofts, downtown Plainview’s newest affordable rental housing unit converted from an old Hilton Hotel, is the strength of a community working together and most importantly, city leaders refusing to take no for an answer.

“I told Mike Fox, (Plainview Economic Development Executive Director) ‘no’ several times when he called me about this property,” says Daniel Sailler, MRE Capital Co-Founder. “He finally convinced me to visit the property and when my business partner Jake and I saw it, we knew it was a good project.” 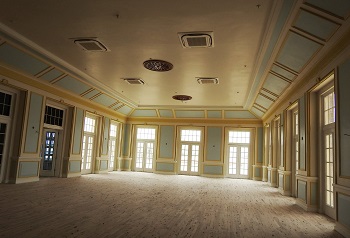 The project is the fifth Hilton Hotel built by Conrad Hilton in the United States, and opened in 1929. The premiere hotel for its day—it was located by a Greyhound bus station—featured a store where travelers could purchase knick-knacks and souvenirs, a ballroom for events, and a private club.

The hotel continued to be open until the 1970s and then sat abandoned for more than 30 years. Plans for renovations were discussed and several years ago, a group of volunteers began cleaning up the building. While plans were made, finances were short. 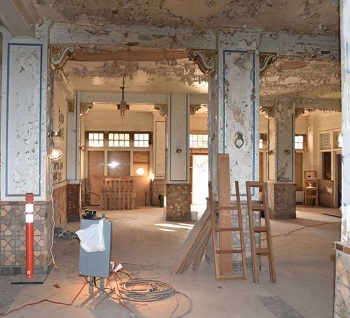 While the spaces are utilized differently than they were 70-plus years ago, the ballroom was renovated to look the same and some of the building’s original glass windows also still fill the panes. Other restored features include the atrium, handrails, windows, and the floors in the lobby. The lobby floors were restored by a gentleman in Amarillo whose grandfather had helped lay the original lobby floors.

Inside the building’s west entrance sits a painting that decorated the lobby many years ago. Harley Redin, well-known former Wayland Baptist University basketball coach, said the painting was passed on from a bank storage vault to him for safe keeping many years ago. In early April, he and his wife, Wilda, returned it for display inside the Conrad Lofts. 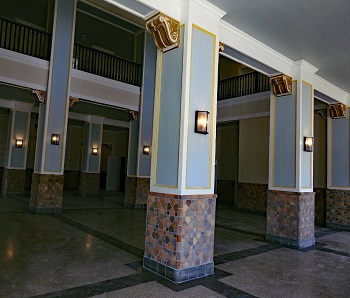 Only a couple of years from beyond disrepair, the process to restore the building started off well. The roof and the “bones” of the building were in good shape. As with many construction projects, it took longer than expected and cost more than anticipated, but the results speak for themselves.

The affordable housing projects contain 29 apartments including studios and one, two, and three bedroom units ranging from 796-1,900 square feet. The large open floorplans include fully equipped kitchens with a garbage disposal, dishwasher, microwave oven, refrigerator, and stove/oven. Each home also has ceiling fans and includes a washer/dryer.

“The group effort of the Plainview EDC, city, county, and citizens of Plainview is what made this project a reality. We look forward to seeing its success in downtown Plainview for many decades,” said Sailler.

About the Texas Main Street Program

The national Main Street revitalization effort for historic downtowns was formed more than 35 years ago, and there has been a statewide Texas program since that time operating through the Texas Historical Commission. The Texas Main Street Program is one of the oldest and largest in the nation, with 90 fully designated communities. The program was brought to Texas by Anice Read, a former member of the Texas Historical Commission, who also served as first director of the state Main Street effort in 1981.