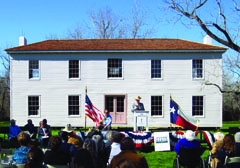 The Levi Jordan Plantation near Brazoria has experienced a tremendous transformation over the past several years. What was once a neglected homestead is now a nearly restored historic structure with interpretive plans taking shape in preparation for regular visitation in 2015.

Recent preservation efforts at the site—one of the Texas Historical Commission’s (THC) 20 state historic sites—focused on stabilizing the building and slowing the deterioration that threatened its survival. The process began with adding new concrete beams and piers to provide foundation stability with minimal visual impact.

Afterward, the wood siding was removed, the timber frame was repaired and reinforced, and new siding was installed. All the original wood windows were removed, preserved, and reinstalled. The roof structure was reinforced and received new cedar shakes (shingles).

Interpretive planning for the site began late last year and included a review of all available historic materials and the creation of a strategy for further research on the site. Earlier this year, a meeting was held for area residents and others interested in the history of the Levi Jordan Plantation and its role in telling the real stories of Brazoria County’s past. Forty-five stakeholders—including descendants of the Jordan family, members of the Brazoria County African American community, academics from Prairie View A&M University, archeologists, and representatives of local heritage organizations and museums—attended a day-long workshop to assist in identifying vital aspects of the site’s history and how these could best be communicated to future visitors.

“Work on the plan is ongoing, and will culminate in a finalized Interpretive Master Plan late this year,” explains Brett Cruse, sites supervisor with the THC’s Historic Sites Division. “This plan will lay the groundwork for developing exhibits and programs to highlight the site’s compelling history.” 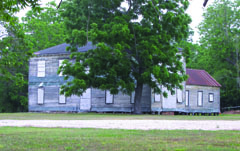 The plantation’s origins date to 1848, when Jordan, an Arkansas planter, acquired more than 2,200 acres of land west of the San Bernard River in Brazoria County and relocated his family and his agricultural operation to Texas. Upon taking possession of his land, Jordan left perhaps a dozen enslaved workers there to begin construction of residences while he relocated his family. The main plantation house was a two-story, four-room, wood-frame Greek Revival style home. It was completed in the mid-1850s. The workers also built several slave quarters and a sugar mill.

Jordan died in 1873 and management of his agricultural empire fractured as it transitioned to his grandchildren’s generation. By the late 1880s, the slave quarters area of the plantation was abandoned, and over the next few decades the structures deteriorated. With time, the structural foundations, tools, and personal items left behind by the former plantation inhabitants became a wealth of archeological information related to the African American experience in 19th-century Texas.

Note: The site is not open daily to the public during its current development planning phase. However, staffers open the site on the first Saturday of each month between 10 a.m. and  2 p.m. for interested guests. In addition, the site is open for reserved tours.

This article was originally published in the Fall 2013 issue of The Medallion.