On April 5, the Friends of the San Felipe de Austin State Historic Site hosted a “Links to the Past” golf tournament at nearby Stephen F. Austin Golf Course. The tournament aimed to build awareness of the historic site’s development, raise funds to support projects at the San Felipe site, and underwrite a series of interpretive panels at the course. All three goals were met beyond expectations.

The day boasted perfect weather for the golf outing. About 120 players, sponsors, and volunteers came out to celebrate the day and to raise funds for the historic site. Along with more typical team and individual golf contests during the day, the Friends offered the chance to use a golf ball cannon to launch a drive (using a black powder blast) on one of the par-5 holes. A dinner and silent auction closed out the affair. 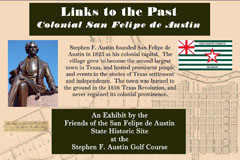 The goal of installing a long-term exhibit at the golf course was by far the most ambitious, and should ultimately be the most rewarding. The 18 panels narrate the story of San Felipe de Austin as the capital of Austin’s Colony from its founding in 1823 to its ultimate destruction in 1836 during the Runaway Scrape. For a small town like San Felipe, this represents a unique way of branding the area for visitors and tourists.

The “Links to the Past” exhibit will enter production in a few weeks and should be installed early this summer. Course manager Bobby Browne has long wanted to brand his course with the history of the colonial town, and it will become a reality in June. A preview of the 18 panels was unveiled at the April tournament—one at the tee box for each hole, an introductory panel, and one acknowledging the sponsors with an invitation to join the Friends in their efforts to support the site.

One last chapter of the fundraising effort related to the tournament is ongoing. Bids will be taken through May 31 on a replica ring, patterned after one worn by William B. Travis at the Alamo and tied around the neck of infant survivor Angelina Dickinson. Travis had been given the ring by Austin colonist Rebecca Cumings before he reported to the Alamo compound. Travis lived at San Felipe the last few years of his life and courted Ms. Cumings, whose family ran a saw mill near the capital town. Austin County artist and jeweler Max Lang donated the ring to support the Friends’ fundraising efforts. For more information about the ring, or to inquire about making a bid, send an email to friendssfdashs@gmail.com. Please include a phone number with your inquiry. The winning bid will be revealed at the unveiling of the panels this summer.

The Friends of San Felipe de Austin State Historic Site would like to thank the members of our tournament committee for their contributions to this very successful effort: Chair Jim Chandler, David Franklin, Frank Monk, and Fred and Betty Strauss. We would also like to thank all of the players and sponsors who supported our efforts. Next year’s tournament is already slated for Friday, March 28.