These real numbers tell the real story about the Texas Historical Commission’s (THC) positive effect on Texas’ economy: The impact of historic preservation in Texas is more than $1.7 billion annually. This results in more than 40,000 jobs, $890 million in income, $1.4 billion in gross state product, and $445 million in state and local taxes every year.

The THC oversees more than two dozen preservation programs reaching all corners of the Lone Star State. Although each of them impacts Texas’ economy—particularly in rural areas where travelers contribute to local businesses—three agency programs are especially notable for their significant economic impact. They are the Texas Historic Courthouse Preservation Program (THCPP), the Texas Main Street Program (TMSP), and the Texas Certified Local Government Program (CLG). 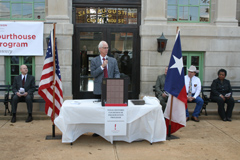 As public buildings, Texas courthouses are among the state’s most widely recognized, used, and appreciated assets. THCPP participants experience numerous benefits, including building functionality, a tourist attraction, and a tangible link to the past.

More than 9,600 jobs have been created since the program’s inception in 1999. More than $22 million in state taxes and an additional $21 million in local taxes have been generated, and the gross state product has been increased by more than $367 million.

To date, 63 counties have received full funding for their construction projects, 56 of which were completed and rededicated by the end of 2012. Another seven courthouse restorations will be completed in 2013–14. Thirteen counties received grants in the most recent $20 million grant cycle (FY 2011–12), which was announced in January 2012.

The economic impact has been especially significant in Texas’ rural communities, where courthouses often anchor a historic downtown district, and the associated heritage travelers—who spend almost $400 more per trip than average travelers—bring money to the community.

For example, commercial properties on the square surrounding the Wharton County Courthouse had a 279 percent increase in property values between 2006 and 2010 when the courthouse project was finished. Occupancy rates went from 30 to 70 percent during the same period. “There are few places that can strengthen and transform an entire community, but a restored cherished courthouse will,” said THC Architecture Division Director Sharon Fleming. “All across Texas, we’ve seen it happen in counties that have joined the program to restore their beloved courthouse. They have made a truly remarkable transformation.” 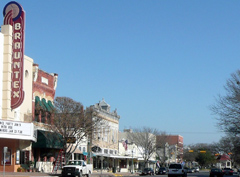 The grassroots, community-empowered Four-Point Approach of the nationwide Main Street effort, which has been utilized in Texas over the past three decades, provides evidence that the economic impact of preservation-based activity is significant.

Since its origination, designated Texas Main Street communities have reported almost $2.65 billion in overall reinvestment. The largest component of that figure is $1.73 billion in private reinvestment.

Additionally, 7,425 businesses have been created, expanded, or relocated in Texas Main Street districts. These small, independent entrepreneurial ventures have created 28,729 jobs and are an important factor in each community’s economic health.

“These small businesses are largely locally owned and operated, and many have been in existence for generations, some in the same family,” says Brad Patterson, director of the THC’s Community Heritage Development Division. “These long-time businesses are a cornerstone not only of their individual community’s history, but also to Texas’ collective history and economy.”

As of fall 2012, about 40 percent of the 83 designated programs had populations of less than 10,000 and had participated in TMSP an average of 13 years. Collectively, these communities recorded reinvestment of almost $41 million since the start of 2010. During this time, they also reported the creation, expansion, or relocation of 146 businesses, which created 518 jobs.

In mid-November 2012, the city of Georgetown celebrated 30 years of success in preservation-based downtown revitalization. Speaking at a ceremony celebrating the anniversary, Linda McCalla, the program’s first staffer, recalled downtown’s dismal state in 1982: mostly vacant and decaying buildings, with “no place to eat downtown…and a seriously altered courthouse.”

Since then, Georgetown’s population has climbed to almost 50,000, the courthouse has been restored through the THCPP, and more than $54 million in reinvestments has been reported during its participation. The Main Street effort, McCalla says, gave downtown “transformative new life.” 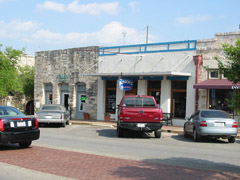 With most preservation efforts occurring at the local level, the federal government developed the CLG program
to support and grow local initiatives designed to achieve a community’s historic preservation goals.

Texas CLG grants create jobs, allow for the hiring of consultants, and inject money into the local economy for historic preservation projects. In addition, the projects often serve as a starting point for future projects, including building restoration, historic resource designations, and the development of heritage tourism assets. In the previous three fiscal years, the Texas CLG program awarded 31 grants for a total of $380,500, resulting in the completion of preservation projects totaling more than $800,000 around the state.

The program, a partnership between the National Park Service, the State Historic Preservation Office (which in Texas is the THC), and local governments, offers opportunities to encourage local preservation efforts.

For example, Central Texas’ Comal County recently received a $40,000 grant to help fund a comprehensive resources survey. The grant allowed the county to sign an $80,000 contract with a Texas consulting firm to conduct the survey. The consulting firm assigned four task members to conduct the survey, and their efforts included purchasing materials in the community, and other activities that supported the local economy.

“These and all of the THC’s programs have had a significant and direct impact on local economies,” says the THC’s Deputy Executive Director Terry Colley, noting that in the past two years, the THC’s Texas Heritage Trails Program and its partners leveraged state funds to access $8.9 million in federal transportation enhancement grants for heritage tourism efforts. “They are important economic engines, allowing Texans to create new jobs, support their communities, and keep our state’s rich heritage alive through historic preservation projects.”