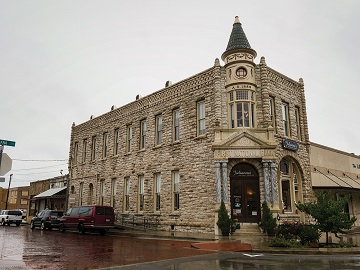 While exploring the Lone Star State’s historic downtowns, many travelers are understandably drawn to the architectural beacons of courthouse towers. Some visitors may continue strolling throughout a historic business district in search of cafes and boutiques without noticing the buildings in between.

Even fewer will realize that many of these historic structures on courthouse squares, housing private companies or nonprofit organizations, were preserved and enhanced thanks to tax credits.

The original raised plaster frieze—a broad horizontal band of sculpted or painted decoration—was discovered above a dropped ceiling, although it was crumbling and partially removed. As a crowning touch, the owners restored a section of the plaster frieze and used decorative painting techniques to interpret its missing portions.

In Mount Vernon, the 1916 M.L. Edwards & Co. Building is prominently located near the restored Franklin County Courthouse. The building is an excellent example of an early 20th century commercial structure, but is most notable for having been owned by members of the Edwards family for 100 years. The building was constructed by M.L. Edwards after his general store outgrew its smaller building. The new building provided him the opportunity to expand retail offerings and add an undertaker service on the second floor.

Tax credit assistance allowed the new owners to reimagine the building as a retail shop, restaurant, and events venue. They removed a non-historic storefront from the 1980s and restored the original storefront, which features transom windows painted to advertise wares. Inside the building, the expansive tin ceiling was selectively repaired, and a new lift was added to make the second floor accessible. The original freight elevator that carried coffins to the second floor was also restored. 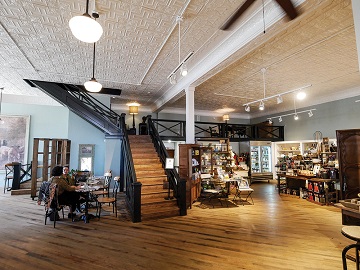 Many projects that utilize both historic tax credit programs are large, but developers are increasingly using the programs to revitalize small-scale buildings on courthouse squares and in Texas Main Street cities.