Preserving the Craft of Papel Picado 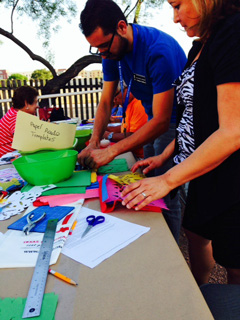 Fiesta Week in San Antonio is a time when the community comes together to celebrate local and statewide heritage. In keeping with this spirit, Casa Navarro State Historic Site hosted an evening of activities based on the traditional decorative craft known as “papel picado.”

Eduardo Velasquez and Patricia Perez of Alianza LatinoAmericana provided demonstrations of the craft in its traditional form, using hammers and chisels to carve intricate designs in layers of paper. Guests were invited to craft their own papel picado masterpieces by folding and cutting designs into layered tissue paper, then stringing them together to hang in their homes.

The craft of papel picado has its roots in Mexico's indigenous communities, which crafted amatl banners made of fig and mulberry. In the past, plates of metal were used as the material for the folk craft. However, the use of papel de china (tissue paper) eventually grew in popularity due to its affordability and ease of handling. 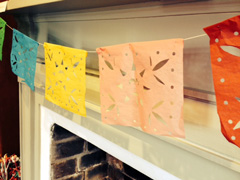 Papel picado’s popularity as an affordable and practical way of decorating for festivals spread quickly, especially in northern Mexico where it was frequently used for celebrations on large ranches and frontier towns. In Mexican and American Texas, Tejanos used papel picado to celebrate religious and national holidays such as Cinco de Mayo and Our Lady of Guadalupe Day, which were important in forming a sense of community identity. The traditional craft associated with decorating for these festivals has remained popular at San Antonio festivals to this day.