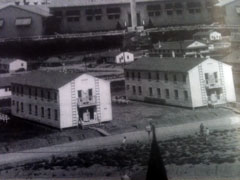 In June 1941, more than 1,100 acres in Grayson County near Sherman were designated for a U. S. Army Air Corps basic flight training field. On December 16, 1941, the first class of flight students arrived at Perrin Air Field, named for Lt. Col. Elmer D. Perrin, a Texas test pilot killed in the line of duty. Pilots trained here for combat in World War II, Korea, and Vietnam. Today, you can visit the Perrin Air Force Base Historical Museum in Denison, which has an expansive collection of artifacts and history of the installation.

Placed in 1988, the historical marker for Perrin Air Force Base reads:

Plans began in early 1941 for a U. S. Army Air Corps installation to be located in Grayson County. This 1,160-acre site was acquired in June, and Air Corps personnel began arriving in August. The base was to serve as a basic flight training facility. During its construction, the U. S. was drawn into World War II following the Japanese attack on Pearl Harbor on December 7. The first class of flight students, which arrived on December 16, graduated in February 1942 in ceremonies which included the dedication of the base in memory of Lt. Col. Elmer D. Perrin, a Texas test pilot killed in the line of duty in 1941. Pilots trained here served in World War II, Korea, and Vietnam. Their airplanes ranged from basic trainers of the 1940s to jets of the 1960s and 1970s. The presence of the air base became important in the life of Grayson County, creating jobs and boosting the local economy. Following the death in 1961 of Sam Rayburn, Speaker of the U. S. House of Representatives, many dignitaries, including the president and vice president, arrived here and were transported by base personnel to the funeral in nearby Fannin County. Partly because of increased air traffic in the area, Perrin Air Force Base was closed in 1971. 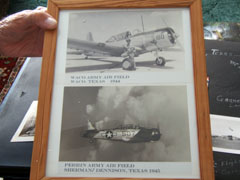 Interested in learning more about Perrin Air Field and the museum that commemorates its service? Along with the Grayson County Historical Commission and Sherman Main Street Program, the THC will co-host a free oral history training workshop at the Perrin Air Force Base Historical Museum on January 25, 2014. The workshop is the second in a special two-year series of 12 THC-coordinated Texas in the Cold War oral history training workshops around the state. The series “When the Lone Star State Met the Iron Curtain: Recollections of Texas in the Cold War” will highlight the real places telling the real stories of Texas’ involvement in the Cold War, including the war’s impact on the home front. The workshops are designed for people to learn how to conduct and record oral histories, including hands-on training with digital and video recording equipment.