Presidents Day in Texas: Remember Success, Tragedy, and Leadership of U.S. Presidents at These Historic Places

There is an interesting collection of Texas destinations to visit with compelling connections to several former commanders in chief. Texas has three presidential libraries—the most of any state in the U.S.—where visitors can explore artifacts and exhibits examining the people, places, and events that influenced their time in office. There are also several lesser-known destinations with intriguing stories and ties to American history.

THEODORE ROOSEVELT (San Antonio)
The career of Theodore Roosevelt—our youngest and still one of the most popular presidents—received a huge boost in San Antonio, where Roosevelt traveled in 1898 to recruit a volunteer cavalry regiment. At the famous Menger Hotel across from the Alamo, Roosevelt enlisted his Rough Riders, who would train in San Antonio and help Roosevelt return a war hero from the Spanish American War. A visit to the beautiful Menger Bar summons the memory of TDR in an authentic and relaxing environment. 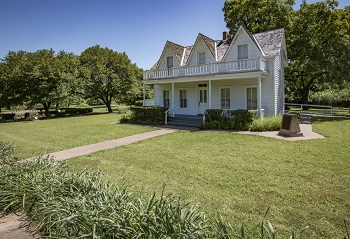 DWIGHT EISENHOWER (Denison)
Dwight David “Ike” Eisenhower, the 34th president of the United States, was born in the downstairs bedroom of his family’s Denison rental house. Now our Eisenhower Birthplace State Historic Site sits on several large residential blocks featuring historic buildings and landscaped grounds. Hundreds of items relating to Eisenhower and his role in American and world history fill the house. Although the infant “Ike” spent just his first year in the house before his family returned to Kansas, the site provides a vision of pastoral, Red River Valley town life at the turn of the century. 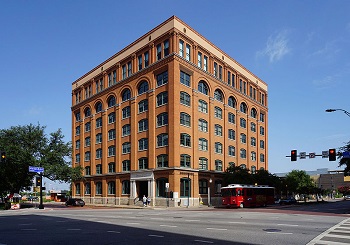 JOHN F. KENNEDY (Dallas)
Texas played an important role in JFK's presidency. It was the home of his Vice President Lyndon B. Johnson and also a key part of his successful 1960 electoral strategy. But it was also the site of his tragic assassination in 1963. Dallas' most-visited heritage site, Dealey Plaza Historic District, is also a National Historic Landmark. On the plaza is the former Texas School Book Depository, now the Sixth Floor Museum, which recounts Kennedy’s life, death, and legacy in dramatic sight-and-sound exhibits. Dealey Plaza also encompasses the 1970 Kennedy Memorial by noted architect Philip Johnson, the Dallas Municipal Building where Lee Harvey Oswald was killed, the "Old Red” Courthouse, and other historic buildings.

LYNDON JOHNSON (Austin, San Marcos, Stonewall)
Lyndon Johnson, the 36th president, was all Texan. His original birthplace—a board and batten dog-trot—had no modern conveniences and a bare dirt yard. He took pride in his humble origins and arranged to have his home reconstructed. Johnson utilized the same architectural style but made such great improvements that the home served as guest cottage for overflow company visiting. Today, the Lyndon B. Johnson National Historical Park encompasses more than Johnson’s boyhood home and his later family’s ranch house residence, making for a full day of heritage discovery. Nearby, LBJ resides in his final resting place, the Johnson Family cemetery. 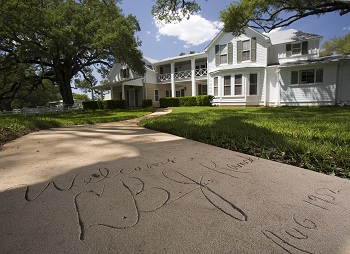 In 1928, Southwest Texas State Teachers' College (now Texas State University) granted a teaching certificate to Johnson, who worked for a year at a poor Mexican-American school in Cotulla. The LBJ Museum of San Marcos focuses on Johnson’s college years and the impact of that time on his presidency, when he signed civil rights, anti-poverty, and education laws. Located in a former movie theater, the museum tells the story through period news clippings, photographs, memorabilia, and oral histories.

In nearby Austin, the Lyndon Baines Johnson Presidential Library and Museum is one of 10 presidential libraries administered by the National Archives and Records Administration. The striking white marble building houses multimedia and artifact-rich exhibits that chronicle Johnson’s life and times. Visitors stroll through a reproduction of his Oval Office into exhibits about Lady Bird Johnson’s life as first lady and listen to a life-like animatronic LBJ that tells a few of the president’s favorite stories. 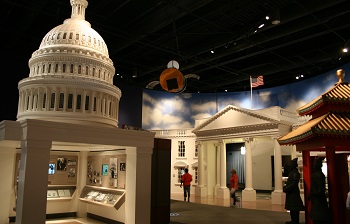 GEORGE BUSH (College Station)
George H. W. Bush, the nation’s 41st president, had already garnered an impressive list of titles before his election as the most powerful man in the country. Bush served as Texas congressman, United Nations ambassador, director of the Central Intelligence Agency, Vice President to Ronald Reagan, and more. His career of public service, term as president, and World War II heroics are detailed throughout the exhibitions and archives of the George Bush Presidential Library and Museum in College Station. Located on the campus of Texas A&M University, the handsome museum building features “The Day the Wall Came Down”—a monumental sculpture of five bronze horses leaping over actual rubble from the Berlin Wall. 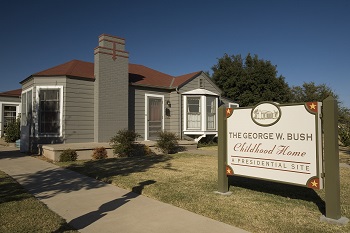 GEORGE W. BUSH (Dallas, Midland)
George W. Bush Presidential Library and Museum is the newest national presidential library. The Library houses the official records of the presidency, and the Museum is the repository for presidential gifts as well as other donated artifacts relating to the life and career of President George W. Bush and Mrs. Laura Bush. The permanent exhibition explores critical events and issues of the Bush administration using artifacts, documents, photographs, and videos from the Library’s extensive collection. The 14,000-square-foot Museum includes features such as a full-sized Oval Office, a Texas Rose Garden, and interactive elements.

During the 1950s, the Bush family lived in Midland, which hosts the George W. Bush Childhood Home. This modest yet comfortable 1939 house reflects the lives of the Bush family through informative exhibits, photos, and home furnishings. One of the highlights is George W.’s room, filled with 1950s memorabilia depicting the activities he was involved with at the time, such as Cub Scouts, Little League baseball, and the Roy Rogers fan club. Other rooms replicate the domestic feel of the kitchen and den, with exhibit panels placing the family’s life and Midland history in context.