Prisoners of War at Fort McKavett 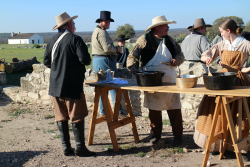 Fort McKavett State Historic Site came to life on March 17–19 with the presence of historical reenactors during the “Imprisoned on the Frontier 1862” reenactment. Participants from five states arrived at the site and immersed themselves into spring 1862 to recreate the historic Confederate Prisoner of War camp.

The participants were divided into three groups. The first represented soldiers from Company E, 1st Texas Mounted Rifles, who served as the prison guards and frontier defenders. The second group was comprised of Union soldiers of the 8th Infantry Regiment, who were imprisoned after their surrender at the Battle of Adams Hill. The last group represented local civilians who supported the soldiers and prisoners by running the kitchen and sutler store. 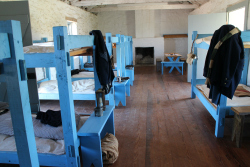 The prisoners and their guards did not spend the days of internment in idleness. Work parties were formed to accomplish some of the maintenance tasks around the site. Both prisoners and guards spent time hauling and placing rocks along the company streets, clearing and planting the post garden, and building new shutters for the barracks. The relationship between the loyal Union troops and the Texans was generally amicable, despite a few angry flare-ups over loyalty and courage. Being a military post, both groups were expected to keep their barracks rooms clean and orderly. Inspections for contraband were conducted periodically and those found in possession were aptly punished.

This event was unique among living history events because it gave site visitors a true sense of traveling back in time. More than 200 visitors took a step back to 1862 and had a chance to see history in action. The participants certainly gave them a great show and enjoyed themselves as well. We want to thank everyone who came out to participate and all those visitors who came to see history brought to life!

For more information on the history of Fort McKavett and the Confederate POW camp there, read our Frontier Prisoners of War article.