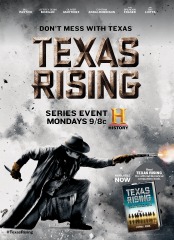 Tonight, the History Channel will debut its Texas Rising miniseries, which tells the story of the Texas Revolution, the Republic of Texas, and the rise of the Texas Rangers over the course of five two-hour episodes. Clips from the series were shown at a star-studded premiere at the Alamo on May 18, which featured members of the cast including Bill Paxton, Kris Kristofferson, Brendan Fraser, Cynthia Addai-Robinson, Ray Liotta, Christopher McDonald, and more.

Having only seen a few short clips from the series, it’s hard to comment on its historical accuracy (except to say that the coastal plains of Texas look nothing like the arid, mountainous landscape of Durango, Mexico, where Texas Rising was filmed). But we are very excited that these seminal events in Texas history are being shared with a national audience, and we look forward to watching their dramatic interpretation on screen. 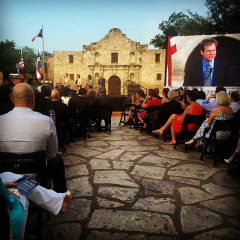 We also hope that fans of Texas Rising will be inspired to learn more about our state’s revolutionary and early democratic history. Here are four of many places in the Texas Independence Trail Region where people can experience that history firsthand.

Texas Rising opens at the Alamo, the most visited and (arguably) revered historic site in the state. Just over a mile away in the heart of old San Antonio is another significant site related to Texas independence that receives just a fraction of the Alamo’s visitation. Our Casa Navarro State Historic Site is the former homestead of patriot José Antonio Navarro, a successful merchant, rancher, and statesman who was one of only two native Texans to sign the Texas Declaration of Independence in 1836. An unsung hero, he served in Texas legislatures and advocated for Tejano rights under Mexico, the Republic of Texas, and the State of Texas. The house complex is a place to learn about his legacy and San Antonio’s old “Laredito” neighborhood. 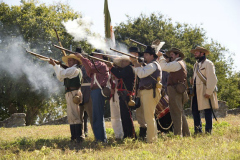 About two weeks after the fall of the Alamo, another important battle took place that is often overshadowed by those at the Alamo and San Jacinto—and by the grim event in its aftermath. On March 19, 1836, 300 Texian volunteers led by Col. James Fannin retreated from Presidio La Bahía (aka Fort Defiance) toward Victoria. At Coleto Creek, about nine miles east of Goliad, they were surrounded by Mexican forces on an open prairie. The Texians fought off repeated attacks throughout the day, but Fannin surrendered the following day when it became clear that it was virtually impossible to continue fighting.

Although Mexican Gen. José de Urrea recommended clemency, Fannin and his troops were marched back to Presidio La Bahía and executed a week later by order of Mexican Gen. Santa Anna. Deemed the Goliad Massacre, the execution of prisoners served to inflame the Texas cause, and “Remember the Alamo! Remember Goliad!” became a battle cry for Texian forces at San Jacinto.

The site of the Battle of Coleto Creek is now a THC historic site—Fannin Battleground State Historic Site—where a commemorative obelisk and historic gin press screw mark the location of the battle, and interpretive panels and exhibits tell its story and significance. 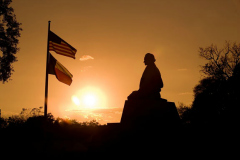 Founded in 1824 by Stephen F. Austin as the unofficial capital of his colony, San Felipe de Austin became the colony’s first urban center. By the eve of the Texas Revolution, it ranked second only to San Antonio as a commercial center, with an 1835 population of 600. The town played a significant role in the revolution, hosting the conventions of 1832 and 1833, and serving as the capital of the provisional government until the Convention of 1836 at Washington-on-the-Brazos in March 1836.

During the Runaway Scrape, Texas settlers fled their homes as Gen. Santa Anna’s Mexican army approached and Sam Houston’s Texian forces retreated. Houston’s forces retreated through San Felipe de Austin, and on March 30, 1836, a small garrison left to defend the town ordered it burned to the ground to prevent it from falling to the Mexican army.

San Felipe was rebuilt after the Texas victory at San Jacinto, but while it became the first county seat of Austin County, the town never regained its former stature. Now a THC property, San Felipe de Austin State Historic Site features a bronze statue of Stephen F. Austin, a commemorative obelisk, a log cabin replica of the colonial land office, a visitors center, and interpretive panel exhibits. The THC is conducting ongoing archeological investigations at the site in preparation for a future museum and major site improvements to this important place that played a central role in the development of Texas. 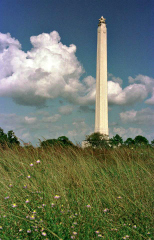 The iconic 18-minute battle for Texas independence that took place on this coastal prairie on April 21, 1836, provided a decisive victory for Sam Houston and his forces, as the small army defeated Santa Anna’s 1,200-man Mexican army. Visitors can walk in the footsteps of the Texas heroes, learn more about the battle and the Texas Revolution at the San Jacinto Museum of History, ride the elevator to the 489-foot-tall observation town of the San Jacinto Monument, watch the 35-minute film, “Texas Forever! The Battle of San Jacinto,” and tour the Battleship Texas.

Just outside San Jacinto Battleground is Juan Seguín Park at 4407 Independence Parkway. It is named after the Tejano hero who played a role in the battles of the Alamo and San Jacinto, directed the burial of the Alamo defenders, and became a senator in the Republic of Texas, who advocated for Tejano rights along with José Antonio Navarro. The park features interpretive panels depicting the events and locations of the Runaway Scrape, including the nearby Lynchburg Ferry site.

These sites are part of the 28-county Texas Independence Trail Region of southeastern Texas. The region stretches from Liberty (east of Houston) along the Gulf Coast to Refugio (south of Victoria) to San Antonio in the west and to Washington and Bastrop counties in the north. It is full of many more places that hosted key events of the Texas Revolution, including Gonzales, Goliad, and Washington-on-the-Brazos. Discover historical, cultural, and natural treasures related to the Texas Revolution, and plan your next Texas adventure at TexasTimeTravel.com.