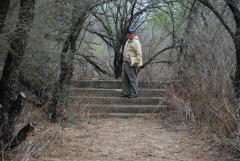 Since 2008, the Kinney County Historical Commission (CHC) has been of tremendous support to the Military Sites Program with historic documentation on Fort Clark during World War II, in addition to providing valuable info about other periods of the fort’s history. From 2008–11, on three occasions former Kinney CHC Chair Bill Haenn and fellow commission members lent their time and expertise to provide THC staff with guided tours of the World War II remains of the former U.S. Army post near Brackettville. 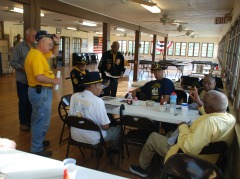 One truly memorable visit took place in September 2008, when THC staff was asked to join the Kinney CHC and the Friends of Historic Fort Clark for a special event called “The Last Tattoo of the Buffalo Solider.” Former U.S. Army veterans of the last all-African American cavalry division (the 2nd Cavalry) were invited back to Fort Clark and treated to several days of celebration of their military service. The event’s coordinators, retired U.S. Army veterans living at Fort Clark, had a simple concept in mind when they planned the event: to salute these very special soldiers on the site of their service. The event was called “The Last Tattoo” because, due to the age of the veterans, the reunion was conceived as likely that last time the elderly veterans would be able to assemble for a military-themed ceremony (i.e., a tattoo) honoring their service. 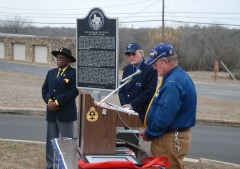 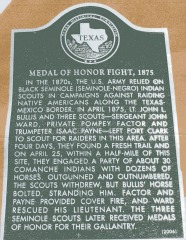 While his knowledge of Fort Clark’s World War II history is extensive, Haenn’s expertise also covers other parts of Texas military history, including the fort’s post-Civil War history into the first half of the 20th century. Haenn had a very intriguing article published this month in the Army Historical Foundation’s ON POINT: the Journal of Army History, (Summer 2013 Vol. 19 No.1). Titled “Bullis’s Medal of Honor Fight at the Pecos River,” the article tells the story of First Lieutenant John L. Bullis and his small force of Seminole-Negro Indian Scouts’ April 25, 1875 fight with Comanche Indians along the Pecos River in Val Verde County. This skirmish resulted in all three Seminole-Negro Indian Scouts receiving the Medal of Honor.

Haenn’s article references the THC’s 2006 historical marker, Medal of Honor Fight, 1875. He said the marker provided the impetus for his article, and it is prominently pictured in the layout. While the article is not posted online, if you’d like to read it in its entirety, consider subscribing to ON POINT by joining the Army Historical Foundation.

My late father was second in command of the 9th Cavalry Medical Department at Fort Clark from July 1942-February 1944. Doctor Westen learned to ride a horse while he was in Brackettville. I grew up listening to his stories of the 2nd Cavalry Division.I am a Life member of the 9th and 10th Cavalry Association. We Can! We Will! Sincerely,Greg Westen

Hello -- Rick Pena -- a Nephew of the 'Subject' is seeking any information to fill time-line voids. Mike entered the U. S. Army in 1940 (Age 15). Assigned to 1st Cavalry Division (1CD) at Fort Hood. Participated in the Louisiana Maneuvers in Spring/Summer 1941. Assigned to Fort Clark for Cavalry duties 1941 - 1943. After 1CD direction to dismount, Assigned to Fort Bliss for Infantry Training and move to aid General MacArthur in the Pacific. Sent to Australia for Jungle warfare training. Assigned to 1CD Units under G. MacArthur, fought Admiralty's, Leyte, Negros, Battle of Manila. After Atomic Bombs of Japan, went to 'Occupy' Japan with G. MacArthur. Assigned to 1CD in Japan post - WW II and then committed to Korean Conflict in Mid 1950. KIA in Korea on September 5, 1950. Received numerous decorations during His ten-years of military service. His Distinguished Service Cross was upgraded to "Medal of Honor" by President Obama in 2014 posthumously after sixty-four years after being KIA. Please respond if any informational records, orders, or photographs of military services at Fort Clark may be available to access. Thanks for Your Attention ...