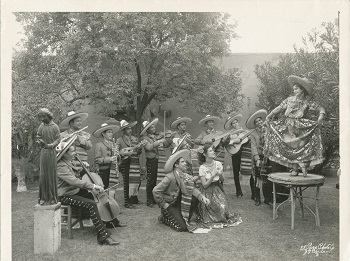 Joseph Magoffin’s grandfather, Beriah Magoffin, was an immigrant from County Down, Ireland, who settled in Kentucky.

Joseph’s father, James Wiley Magoffin, was a trader on the Chihuahua-Santa Fe trail. James Wiley had contact with many American Indian groups as he traveled along the trail.

Her family originally came from the Canary Islands and were pioneer settlers in the Spanish town of San Antonio [now San Antonio, Texas].

Joseph Magoffin had a Chinese tenant gardener. When the train tracks arrived from the West Coast in the early 1880’s, many of the Chinese rail workers stayed in El Paso.

The Magoffin Home State Historic Site reflects the rich cultural and ethnic diversity of the U.S. and El Paso in so many ways.

Our state historic site features photos of menorahs in the Magoffin Home during Christmas time.

Though the Magoffins were Catholic, they had many friends in El Paso’s Jewish community, and they wanted to share in their friends’ celebration.

The interior of the Magoffin Home also reflects the diversity of the country.

Much of the furniture reflects the influence of Charles Eastlake, an influential English architect and designer.

There is also furniture made in Mexico, sewing machines with a German lineage, and many other cultures represented.

The home has Asian art, German vases, French statuary, and other examples of the international influence in the area.

With the Magoffin family’s eclectic tastes and many cultural influences, almost every visitor to the Magoffin Home sees their own family’s history reflected in some way.