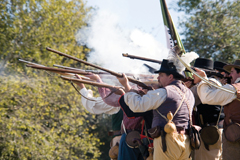 Coleto Creek isn’t grouped with iconic Texas independence battles such as the Alamo and San Jacinto. But it should be. The battle, commemorated at the THC's Fannin Battleground State Historic Site, fired off a month’s worth of tumultuous events in 1836 that ultimately led to independence and the establishment of Texas as a republic.

On March 19, 1836, Gen. James Fannin led an army of 300 Texian volunteers in the pivotal Battle of Coleto Creek. After retreating from Presidio la Bahia to the creek, about 15 miles southwest of Victoria, Fannin and his men spent the day fighting repeated attacks from the Mexican army, under Gen. Jose de Urrea. By nightfall, the Texians were completely surrounded.

With seven Texians dead and 28 wounded, Fannin’s command faced the prospect of fighting their way through Urrea’s lines or remaining on the field. Realizing they would have to leave their wounded, which included Fannin, the Texians reworked their defenses, dug trenches, and waited for sunrise.

Fannin surrendered the next day, and Urrea recommended clemency; however, Fannin’s company was marched to Goliad and on March 27, Palm Sunday, Fannin and most of his men were executed under order from Mexican Gen. Santa Anna. Now known as the Goliad Massacre, the event became a rallying force for the Texians, with battle cries of “Remember Goliad!” urging the soldiers to victory at San Jacinto nearly a month later.

The details of these events and their historical depictions are displayed at the Fannin Battleground site, which unveiled notable improvements just a few years ago. The improvements include the visitors center’s expanded interpretation of the events that took place 175 years ago, a new entryway with gates and signage, and a new flag area incorporating the historic entrance gates and memorial stones. The bandstand preservation project included restoring original window and door openings, painting the exterior structure, restoring the original roof, and installing a new exhibit about the Battle of Coleto Creek. Other improvements include a new restroom building and outdoor interpretation panels.

“Because this was such a key battle in the fight for Texas independence, Fannin Battleground is a must-see destination for heritage travelers,” said Mark Wolfe, executive director of the THC. “A visit here offers a real opportunity to learn more about the compelling history of our agency’s Texas Independence Trail Region.”

Fannin Battleground is featured in Hispanic Texans: Journey from Empire to Democracy, the THC’s recently published statewide travel guide highlighting the history and associated heritage tourism attractions related to Hispanic culture. Order a free copy at 866.276.6219 or TexasTimeTravel.com. In addition, the site will also be highlighted in the THC’s new mobile app, Texas Time Travel Tours.