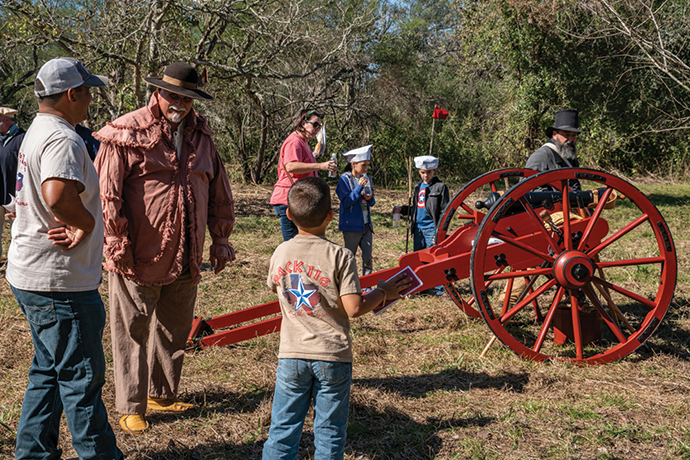 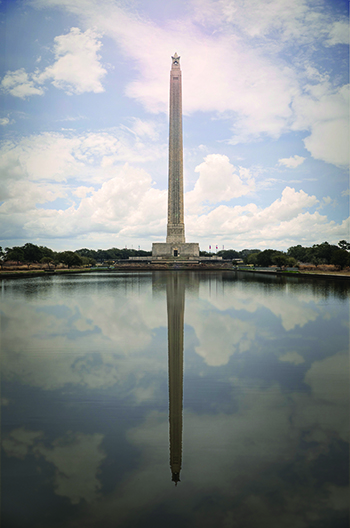 To this day, the Republic of Texas captures the imagination of people across the globe. On March 2, 1836, the founders set in motion a series of events which created an identity that transcended politics and still lasts with us.

Some of the Republic’s most legendary locations—San Jacinto Battleground, Washington-on-the-Brazos, and San Felipe de Austin—remain sacred spaces for Texans, and their stories are preserved and shared at several of the Texas Historical Commission’s (THC) state historic sites.

Despite challenges associated with the coronavirus pandemic, these properties have continued to achieve their mission by hosting visitors in a safe capacity and via online educational materials.

“People still have a strong desire to learn about the history of the Republic of Texas, so we’re seeing a steady number of visitors in person and online interested in these sites,” says Bill Irwin, director of Historic Sites Operations for the THC. “I think we’ll see even more traffic during our 185th anniversary as it becomes safer to travel again.”

SAN JACINTO BATTLEGROUND
San Jacinto Battleground is one of Texas’ most significant historic sites. The revolutionary army’s quick and decisive victory over Mexico at San Jacinto (east of present-day Houston) gave rise to the Republic and State of Texas. A century later, plans were developed for an appropriately larger-than-life structure to honor the monumental events that took place on the battlefield. Texans celebrated the San Jacinto Memorial Monument’s opening in 1939. The remarkable 570-foot-tall limestone edifice honoring the victory site was deliberately designed 15 feet taller than the Washington Monument, and the 1,200-acre site preserves the surrounding battleground.

During the final, shocking, and decisive conflict of the Texas Revolution on April 21, 1836, Gen. Sam Houston and his army of nearly 950 Texian soldiers routed Gen. Santa Anna’s approximately 1,200-man army in just 18 minutes. With fifes and drums playing “Come to the Bower,” a popular tune of the day, the Texians attacked at a run, crying, “Remember the Alamo! Remember Goliad!” In the end, over 600 Mexicans were killed and 700 captured. A shot from a Mexican soldier shattered Gen. Houston’s ankle, but only nine of his men were killed or mortally wounded.

To view an in-depth historical discussion about that fateful battle, watch an informative webinar dedicated to San Jacinto Day on the THC’s YouTube channel.

When the Alamo fell, Sam Houston’s army retreated toward San Felipe. Local militia evacuated the residents and burned the town to the ground on March 29, 1836, then defended the river crossing against Santa Anna’s invading army. While San Felipe de Austin’s prominence lasted only 13 years (1823–1836), nearly every significant character and event of this era of Texas history is connected to this frontier capital. 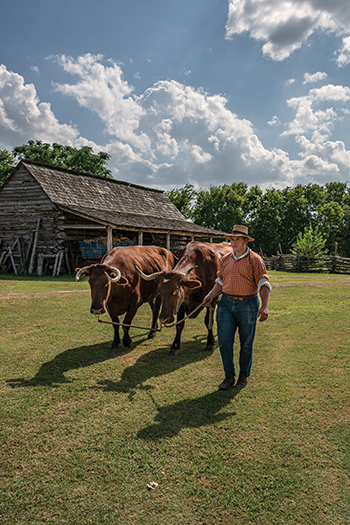 These reconstructed log homes are the basis of “the quarter.” Also in the quarter is a wattle (woven brush) fence enclosing a garden plot and chicken run, which provided supplemental vegetables and eggs for the enslaved families.

Dr. Jones’ records reveal that 37 men and women were in bondage at Barrington during his time there. In 1850, field workers Jerry, Mary, Willis, Jake, and Noble occupied the cabins, while house servants Lucy and Charity likely slept in the kitchen to be on call for the Jones family at all hours.

According to Dr. Jones’ journals, he purchased several teams of oxen, which are currently represented on site with livestock used in the same seasonal way. In fact, the entire property serves as a living history farmstead, where visitors can interact with historical interpreters in period costumes and witness daily life on the 1850s frontier by experiencing crop harvesting, meal preparation, and livestock care.

WASHINGTON-ON-THE-BRAZOS
The historic townsite of Washington was the seat of the Convention of 1836 that declared independence from Mexico and framed a constitution to govern the Republic of Texas.

It’s easy to imagine the fathers of Texas gathering beneath the shade of the site’s outstretched live oaks while forging the principles that would define the Republic. These ideas were officially set in place at Independence Hall, where 59 delegates adopted the Texas Declaration of Independence on March 2, 1836. A 1968 replica of the hall gives visitors a sense of the era’s vernacular architecture and Texas’ humble beginnings.

Washington also served the Republic as the national capital from 1842 to 1845. The town grew to become a modest community of 1,700 with riverboat trading on the nearby Brazos River, but it declined in population and its buildings were eventually dismantled and lost to wildfire by 1912.

STAR OF THE REPUBLIC MUSEUM 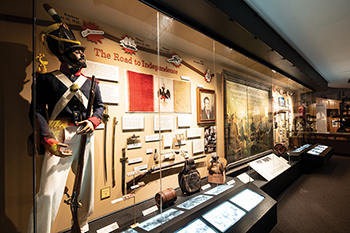 The Star of the Republic Museum showcases the history of the Republic of Texas and social heritage of area inhabitants from Native American tribes to settlers of the 1800s. It is the only museum in the state created by the Legislature for the exclusive purpose of interpreting the republic period of Texas and its material culture.

Highlights inside the star-shaped facility include a Republic-era Lone Star flag, artifacts from La Salle’s Fort St. Louis and La Belle expeditions, an enormous painting depicting the signing of the Texas Declaration of Independence, and an entire second floor dedicated to the social and multicultural history of the Republic of Texas era.

The La Bahía trail passed the inn, bringing visitors by stagecoach and horseback. Fanthorp was admired for his business acumen—charging $2 per guest and running a profitable agricultural enterprise with sheep and corn. However, the arrival of railroads caused stagecoach traffic to decline, prompting the inn to close in 1868.