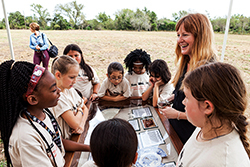 More than 200 supporters and friends heard State Sen. Lois Kolkhorst, State Rep. Leighton Schubert, THC Chairman John L. Nau, III, and THC Executive Director Mark Wolfe speak about the significance of the site and future plans for it. In addition, over 100 fourth-graders from nearby Stephen F. Austin Elementary School were on hand to enjoy programming about the site’s history and ongoing archeological investigations.

On that day, the Friends of the Texas Historical Commission launched a $5.3 million capital campaign for the construction of a state-of-the-art museum at San Felipe de Austin. The state has committed $5.2 million to this project, and the THC is requesting an additional $2 million from the state in the biennium, leaving approximately $5.3 million to be raised from philanthropy.

“San Felipe de Austin, founded in 1823 as the headquarters of Stephen F. Austin’s Colony, played a pivotal role in events leading up to the Texas Revolution,” said John L. Nau, III, THC chairman. “This dramatic story is not nearly as well known or understood as others in the chronicles of Texas history, including the Alamo and San Jacinto. The new museum will change that by telling the story of this historic site.”

To increase public awareness of the colony’s history and significance, the THC is developing a new museum along with an orientation center, exhibits, map plaza, outdoor interpretation, and education programs focused on the site’s history and archeology. 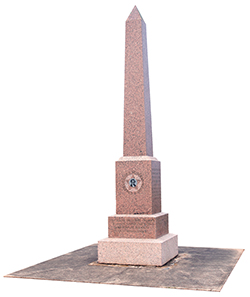 In 1823, Stephen F. Austin—“the Father of Texas”—secured land grant contracts with the Mexican government to bring families (known as the “Old 300”) to form a colony in southeast Texas. San Felipe de Austin became a major hub for commerce, government, and diplomacy and was the site of the first immigration land office, postal service, and early schools.

When the Alamo fell, Sam Houston’s army retreated toward San Felipe. Local militia evacuated the residents and burned the town to the ground on March 29, 1836, then defended the river crossing against Santa Anna’s invading army. Weeks later, Texas independence was won at the Battle of San Jacinto. While San Felipe de Austin’s prominence lasted only 13 years (1823–1836), nearly every significant character and event of this era of Texas history is connected to this frontier outpost.

The THC and the Friends of the THC are very appreciative of the leadership of the campaign’s honorary co-chairs, former Gov. Mark White and Sen. Kolkhorst. The campaign committee includes community leaders from Austin County, Houston, Dallas, and Central Texas, as well as Friends board members from across the state.

“I am thrilled with the commitment from this committee, and am confident that with their leadership and guidance we will achieve success in our efforts,” said Lareatha Clay, president of the Friends of the THC.

San Felipe de Austin State Historic Site
For more information about the San Felipe de Austin museum campaign, please contact Anjali Zutshi, executive director of the Friends of the Texas Historical Commission, at Anjali.Zutshi@thc.texas.gov, or 512-936-2241. For information about site history or to plan a visit, call 979-885-2181 or visit the site's website. The site is open daily from 9 a.m.–5 p.m.