Welcome to our second-ever Tax Credit Tuesday post, a new recurring feature on preservation projects that were completed with the financial assistance of the state and federal tax credits administered by the Texas Historical Commission. 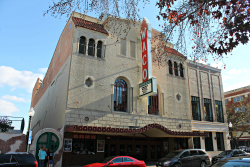 The Hippodrome Theater has pleased crowds in downtown Waco since its 1914 grand opening, which was heralded by a five-piece orchestra, magic shows, and even a live seal act. This well-loved building has undergone a number of shifts in use over its lifespan, driven by changes in the popular entertainment industry. When the Hippodrome was constructed over a century ago, vaudeville theater was the popular amusement of the time. The introduction of silent movies in the 1920s meant the theater transitioned to screening films, and subsequently films with sound. Throughout its life, the space has also served as a center for other shows and community events, including performances by Duke Ellington (and eventually John Wayne).

The building stood strong until 1928, when a major fire broke out in the projection booth and destroyed most of the fanciful Beaux Arts façade. The subsequent reconstruction was an opportunity to redesign the building’s public face as well as its interior; the new Spanish Colonial Revival style building that emerged in the wake of the fire became the version that we are familiar with today.

Movie screening at the Hippodrome ground to a halt in 1974 due to competition with larger, multi-screen suburban movie theaters. After almost 10 years of disuse, it was revived and restored by the Junior League of Waco for use by the Waco Performing Arts Company. The theater again closed its doors in 2010, until it was purchased two years later by local developers Cody Turner and Shane Turner. This team of brothers reimagined the building as a modern dinner-movie entertainment venue, ushering the grand old theater into another new use. 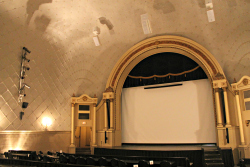 Despite the numerous renovations and a history of underutilization, the building retained most of its historic character for the Turners to use. The 1928 brick façade features arched windows with decorative turned-wood mullions, columned banks of faux window openings with louvered vents, Mediterranean clay tile roofs, a full-width arched metal storefront canopy, and a dramatic, 1.5-story-tall blade sign. The theater space is a traditional proscenium configuration with floor-level and balcony seating. The proscenium arch is tall and rounded, and is flanked by paired columns and pedimented exit doorways; it is mimicked by a second arch that delineates the balcony space. The ceiling underneath the balcony also features a recessed dome. The most majestic feature in the playhouse is the smoothly coved, shell-like plaster ceiling that blankets the space, which has a three-dimensional overall quilted diamond pattern created by a network of raised moldings shaped like branches and rosettes. 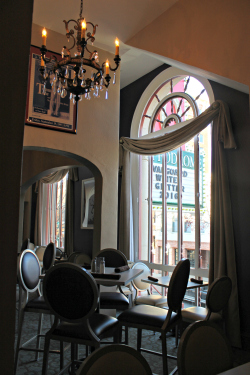 It’s inspiring to hear about way the Turner brothers put their efforts into rehabilitating the Hippodrome. These hometown Baylor graduates already owned property in downtown Waco, but they hadn’t originally considered purchasing the imposing old theater. But as they watched the vacant building slowly deteriorating for two years, they had a change of heart. Although the duo decided at first to take on the project for the general good of the city, they enthusiastically made the operation their own.

As it stood, the building had spatial and functional limitations that needed to be solved in order to get the new use off the ground.

“The building lacked handicap accessibility and an appropriate amount of restrooms to accommodate the space.  We needed to figure out how we were going to address those issues without having to make too many alterations to the existing building,” explains developer Shane Turner. “We were able to achieve this by purchasing the property next door and doing an addition to the building. The addition would house the additional restrooms and an elevator that we needed; it also allowed us to add two kitchens and a dining room.”

The expansion also houses the new ticketing office as well as new egress stairs. This three-story, brick-clad addition was designed in coordination with the THC to harmonize with the historic building, while remaining architecturally distinct. 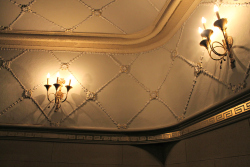 The new addition freed up demands on the original space, which meant that later alterations shoehorned in by recent owners could be removed. Seating patterns in the theater were redesigned with a slight level change to allow for more comfortable dining, and a retractable screen wall was installed to separate the balcony from the main theater—increasing the flexibility of the space and allowing multiple events at the same time—without compromising the overall design. Significant repairs were made throughout the historic building to restore important features to their former glory, including the grand entrance canopy, decorative plaster wall treatments, and ceiling dome in the playhouse.

This remarkable local project took advantage of both the state and federal tax credit programs. When they originally contemplated this $2.8-million project to rehabilitate the well-worn building, “the ability to receive tax credits on this project played a very important part in us deciding to do this,” states owner Shane Turner. “These projects, if done correctly, get very expensive pretty quickly.”

In fact, the state tax credit program was established during the course of the project, so the team was able to receive even more financial benefit than they had initially anticipated. Although the project had many challenges and took almost two years to complete, Turner says it was all worth it, and participation in the tax credit programs were instrumental in making it happen. “We did not want to compromise on the historical integrity of the building because of budgetary issues and this credit helped everything make sense.”

Reopening the vacant Hippodrome has given an exciting new life to a well-loved building. Its new use as a modern dinner theater has also helped reinvigorate the heart of downtown Waco by providing a popular day and evening destination for all ages. Beyond the increase in foot traffic, the project has been meaningful for other reasons. As Turner confides, “The most rewarding part of this project has been seeing how important this building is to our community. We have been able to meet so many people […] that have shared stories going 70-plus years back about their experiences at the Hippodrome. It has also been great having young kids come into the theatre and seeing their reaction to the building.”