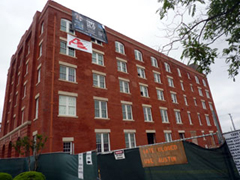 If you died in the U.S. prior to the 1880s, your family and close friends would typically prepare your body for burial in a simple, six-sided box known as a coffin. However, beginning in the 1850s, professional undertakers began to assume the tasks of preparing a body for burial, including delivering the coffin, placing the body inside, and delivering the coffin to the cemetery or graveyard after the funeral service. During the Civil War, the new practice of embalming was used as a way to preserve the remains of soldiers for transport back home for interment. As embalming methods became more sophisticated, so too did the burial containers, with mass-produced burial containers replacing coffins built by local carpenters. These changes in the industry led to undertakers adopting the new title of “funeral directors” during the early 1880s, as well as the gradual shift away from the word “coffin” to “casket” to describe the burial container. 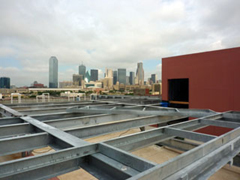 The Dallas Coffin Company was founded by Joseph Parks in 1906 and originally occupied a five-story building in downtown Dallas located in the area now known as Dealey Plaza. The company relocated to the current site at Lamar and Bellvue (now Belleview) Streets in 1909, perhaps due in part to avoid a repeat of the damage inflicted on the western part of downtown Dallas by the massive Trinity River flood of May 1908. In 1910, the company hired the prominent Dallas architectural firm of C.W. Bulger and Son to design a new building to house its business of supplying products to the funeral industry, including coffins, caskets, hearses, and mortuary supplies. C.W. Bulger and Son also designed the Praetorian Building, which at the time of its completion in 1909 was Dallas’ first skyscraper. 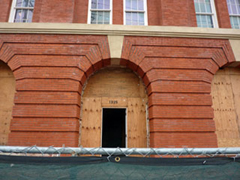 Completed in 1911, the five-story Dallas Coffin Company building features poured-in-place, reinforced concrete structural framing and floors. The exterior walls are constructed of clay tile faced with red brick, and feature double-hung wood windows on the east, south, and north facades of the building, and metal windows on the west side of the building. The first floor originally housed administrative offices and sales rooms, and departments for the finishing of coffins and caskets were located on the upper four floors of the building. Once the new building was completed, funeral directors could contact the company’s office by telephone or telegraph 24 hours a day, seven days a week, and have their orders filled and shipped to them by railway express service.

The Dallas Coffin Company occupied the building until the late 1940s, when the company went out of business. The building was vacant until 1952, when the Reserve Life Insurance Company established offices there and remained until 1958. In 1960, Sears purchased the building in order to expand its operations of the adjacent Sears and Roebuck Catalogue Order and Retail Complex, which was also completed in 1911. Sears operations at the building ceased in the late 1980s. 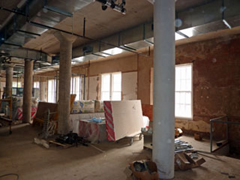 The building formerly known as the Dallas Coffin Company at 1325 South Lamar is now the NYLO Dallas South Side hotel.