On the Road to Progress 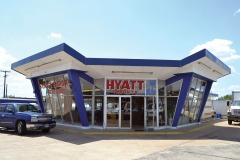 The Bankhead Highway’s impact on hundreds of Texas communities—from colossal cities to tiny towns—remains evident to this day. Upon completion of the highway in the 1920s, businesses and attractions specifically catering to motorists emerged along the transcontinental roadway, which stretched across Texas from Texarkana to El Paso. Fortunately, many of these resources remain intact.

In Texarkana, the historic route along 7th Street is lined with 1940s, ‘50s, and ‘60s motels, restaurants, and gas stations built for those traveling by car. Similarly, in the 1920s, the Bankhead Highway traversed the Deep Ellum neighborhood in Dallas along Commerce Street. Today, the neighborhood retains many of the gas stations, garages, and dealerships dating to that era. In Abilene, South 1st Street contains one of the best collections of historic motels (1930s–60s) along the entire highway’s path in Texas.

In smaller towns, the Bankhead often traversed Main Street business districts. Communities such as Mount Vernon in Franklin County, Ranger and Eastland in Eastland County, and Big Spring in Howard County hosted the historic highway, and they retain respectable collections of auto-related businesses dating to the mid-1900s.

The Texas Historic Roads and Highways Program’s public involvement and survey phases were completed in December 2013. Earlier in the year, teams of professional historians traveled along the route to document historic buildings and structures.

Survey teams followed the five known alignments of the historic highway: a 1922 route based on the T. A. Dunn Tourist Guide; a 1923 route based on a Rand McNally Auto Trails Map; and routes from circa 1930–34, 1936–40, and 1961 following the various historic alignments of U.S. 67 and U.S. 80 based on Texas Highway Department maps. The survey teams began work in Texarkana and traveled westward to El Paso through dozens of Texas communities. 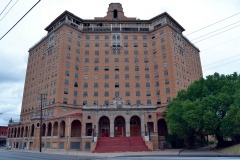 Notable historic hotels identified along the Bankhead Highway include the Adolphus Hotel and the Statler Hilton in downtown Dallas, the Baker Hotel in Mineral Wells, the Mobley Hotel in Cisco, and Hotel Settles in Big Spring. Other noteworthy resources include Fair Park in Dallas and the Kimbell Art Museum and Stockyards in Fort Worth.

“The survey team even documented the Bankhead itself—original roadway segments, bridges, culverts, and some roadside parks,” explains Bratten Thomason, director of the Texas Historical Commission’s (THC) History Programs Division. “They found a segment of the original concrete road from the 1920s that runs for about five miles near Redwater. This stretch really helps shed some light on the highway’s history, with several intact bridges and historic culverts.”

Although multiple original segments of the road remain in various West Texas communities, one of the longest pieces of original brick roadway still in use was documented in Cisco (Eastland County). Extensive segments of brick roadway are still in use in the towns of Eastland and Ranger, and the survey team documented small metal stop signs embedded into the roadway in Eastland and Merkel.

Also of particular interest were two segments of the historic Bankhead Highway that are now under water. These portions of the old highway can be seen partially submerged in Lake Ray Hubbard near Garland and in Hubbard Creek Lake outside of Breckenridge. 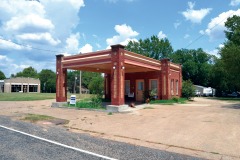 In addition to completing the survey work, the team of historians is also documenting a significant amount of insightful material gathered during the public involvement phase of the project. From August to December 2013, 10 public meetings were held in Texarkana, Mount Vernon, Dallas, Fort Worth, Eastland, Mineral Wells, Abilene, Midland, Van Horn, and El Paso.

In each community, David Moore, president of Austin-based cultural resource management firm Hardy·Heck·Moore, Inc., spoke to the public regarding the project. Attendees were encouraged to share photographs, maps, postcards, and stories about the Bankhead Highway to add to the public body of knowledge. 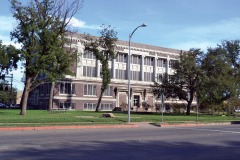 The Bankhead Highway resource team will remain busy throughout the first half of 2014 with multiple tasks, including finalizing the statewide historic context report on historic highways; developing the research and survey materials into user-friendly products (such as electronic-based maps and applications to provide heritage tourism and cultural resource information); creating a historic highway resources typology and National Register of Historic Places eligibility evaluation criteria; and updating the THC’s Historic Sites Atlas database.

Learn more about the Texas Historic Roads and Highways Program at our program webpage, or contact Leslie Wolfenden at 512.463.3386 or leslie.wolfenden@thc.texas.gov for additional information.

Our 3rd Annual Historic Bankhead Highway Drive between Ranger and Baird is Satrurday, April 12th! Contact me for more info!!! <3

Was this not featured in a recent Bob Phillips "Texas Country Reporter"?