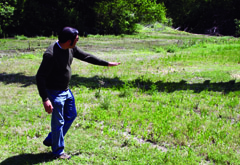 Nestled among Texas’ rolling hills and meandering creekbeds are slight depressions in the earth known as swales. Barely visible to the untrained eye, swales descend into the surrounding landscape, forming elongated u-shaped indentations resulting from centuries of foot, horse, and wagon traffic. In eastern Texas, many swales are remnants of the Camino Real de los Tejas, the legendary Royal Road that transported Native Americans, Spanish colonists, and westward settlers between the Sabine River and the Rio Grande from the late 1600s to the mid 1800s.

Steven Gonzales, executive director of El Camino Real de los Tejas National Historic Trail Association, pointed out examples of swale features at Apache Pass in Milam County on a recent sunny spring afternoon. He noted that travelers would descend toward the San Gabriel River and cross a natural ford at the site as they traversed the Camino Real.

“You can see where they probably walked along this path and down toward the river crossing,” Gonzales explains. “These depressions are very similar to others we’ve seen in the area—once you know what to look for, it’s easier to identify. In fact, there are people so fascinated with these swales that they’ve started calling themselves ‘rut nuts.’ ”

Gonzales hopes this type of intrigue will raise the profile of the trail association, officially designated in 2004 by the U.S. Congress. It is tasked with promoting and protecting the Camino Real’s historic integrity and its modern contributions to tourism and economic development. He notes that the trail is one of the oldest in the nation, and, unlike others, represents several different eras of historical significance.

“This trail is an invaluable national resource—it led to the founding of Texas, and we wouldn’t be calling our state Texas without it,” Gonzales says. “We’re working hard to expand our support base and educate folks about this trail, because it can be a bit overwhelming and sometimes confusing at first.”

For example, Gonzales notes there are challenges distinguishing the trail’s path with portions of the Old San Antonio Road, which the Daughters of the American Revolution designated with markers from 1918–2004. Also, confusion occasionally arises with El Camino Real de Tierra Adentro (another nationally recognized Spanish colonial route near El Paso), as well as inconsistent routes marked by historians over two centuries along with differing designated trail regions. 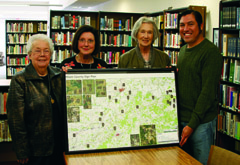 “The list of historically significant people who’ve walked on El Camino Real de los Tejas is quite impressive, from Alonso de León to Moses Austin to Davy Crockett,” Estell says. “We’re hoping to educate Texans about these important historical connections. In the process, we’re hoping some of the property owners along the trail will sign a certification grant or conservation easement to help protect this important part of our history.”

Fellow board member and Rockdale resident Joy Graham adds that signage is crucial for raising awareness and fostering local pride. She suggests communities along El Camino Real de los Tejas follow Milam County’s example by working with the THC to become a Certified Local Government. This entitles designated communities to compete for grants, which can finance a historical resources survey to identify significant sites and provide framework for implementing a sign program.

“It’s very beneficial to develop partnerships with other organizations and communities in your area—this is a nationally significant resource, and it draws people from across the country to explore our shared heritage,” Graham says. 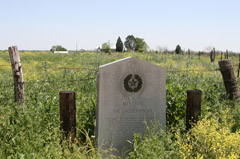 Gonzales notes that El Camino Real de los Tejas is one of Texas’ most threatened cultural resources, with its “tremendous spatial extent” being susceptible to environmental issues. Of primary concern to Gonzales is hydraulic fracturing in the Eagle Ford Shale, which lies below most of the trail’s South Texas territory. He says the fracturing operations typically involve bulldozing large swaths of land for equipment, well pads, temporary housing, and pipelines; as a result, swales and other trail features may be irreparably damaged.

“We don’t want to infringe on the rights of individual property owners or discourage development—we’re just trying to raise awareness so people know this is a threatened resource,” Gonzales says.

In addition, Gonzales cites environmental threats from construction on Interstate 35 near San Antonio, the XL Pipeline in East Texas, and aquifer drilling. As executive director of the trail association, he raises these concerns annually with legislators in Washington, D.C.

“We’re aware that all of these activities are very important to modern development of Texas, but we also need to ensure people are aware of the significance of the trail in making Texas what it is today,” Gonzales says. “It’s a connected foundation representing so many things that made this state so great. We just hope, in turn, that people will respect that history by making an effort to protect the trail.”

He adds that the best way for people to learn about El Camino Real de los Tejas’ extensive history, and the trail association’s resources, is via its website, and regular updates through its Facebook page. These platforms provide updates about the organization’s efforts to engage the community in service projects, add related historical content to Texas’ public school curriculum, raise needed funds, and allow property owners to participate in land certification, conservation, and easement programs along the length of El Camino Real.

“The more people learn about the trail, the more they want to get involved with protecting and preserving this wonderful national resource,” Estell says. “Just recently, I was helping a young Boy Scout with a merit badge project, and I could see the excitement in his eyes as he learned about each new layer of El Camino Real’s rich history. We’re hoping that enthusiasm will catch on with folks all across Texas.”