The 600-foot Northampton-class cruiser USS Houston was sunk by the Japanese Navy during World War II on March 1, 1942 during the Battle of Sunda Strait off Indonesia. The sunken ship served as an unintentional grave for many of the more than 700 sailors and marines that perished in the tragedy.  Of the 1,061 crew on board, only 368 survived, though the fate of the vessel and the crew was not fully known until nearly nine months later. In the interim, a large-scale recruitment drive commenced to enlist more than 1,000 Houston residents, known as the Houston Volunteers, to replace the lost crew. These volunteers were sworn in as part of a dedication ceremony held in Houston on Memorial Day, May 30, 1942.

Though the wreck of USS Houston was conclusively identified in 2014, its resting place had long been known, unfortunately resulting in the looting of this significant archeological site and war memorial.  Historic shipwrecks can be difficult to monitor due to their often-isolated locations, making them vulnerable to underwater theft, large-scale unlawful salvage, and vandalism. There is a heightened sensitivity to archeological sites such as USS Houston that involve loss of life since these sites are somber memorials to historic events. It was such salvage activity in 1967 that initiated creation of the Texas law that protects antiquities—the Antiquities Code of Texas (Texas Natural Resources Code, Title 9, Chapter 191), enacted in 1969.

The salvage of the shipwreck Espíritu Santo in Texas state waters by a private out-of-state salvage firm helped state officials recognize that existing legislation did not adequately protect the state’s antiquities. Espíritu Santo was one of three Spanish galleons from the Spanish plate fleet that wrecked off South Padre Island during a storm in 1554; the fleet was largely transporting silver mined in Mexico from Veracruz to Spain via Havana, Cuba. More than 300 passengers and crew died, many drowning, in what was historically known as the “the Wreck of the 300.” The salvage of Espíritu Santo in 1967 was halted through a court-ordered injunction resulting in a federal court case between the state of Texas and the salvors. Ultimately, the remnants of San Esteban and isolated artifacts from Santa María de Yciar were investigated by the Texas Antiquities Committee (now the Texas Historical Commission) during the early 1970s. The collection is curated and on display at the Corpus Christi Museum of Science and History. 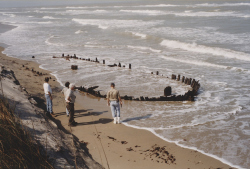 Though vandalism and salvage of historic shipwrecks is prohibited in Texas, this activity still occurs and has notably resulted in damage to two of the state’s 19th-century shipwrecks (also State Antiquities Landmarks) along the south Texas Coast. Looting is also suspected to have occurred at other Texas archeological sites, including some of the Galveston-area Civil War sites such as USS Westfield, flagship of the Union’s West Gulf Blockading Squadron during the Civil War, and at least one of the Confederate blockade runners. In one such case, an artifact from the shipwreck was posted online for sale and was reported to the THC by State Preservation Board staff who discovered the listing.

Private salvage of the Union warship USS Hatteras in 1976, located offshore Galveston in federal waters, resulted in another federal court case, possibly the first such legal challenge to government ownership of its lost warships. A federal district judge decided in favor of the U.S. government. The recovered and returned USS Hatteras artifacts were stored at the Corpus Christi Museum of Science and History prior to being more recently relocated and curated by the Naval History and Heritage Command in Washington D.C.

Legislation regarding salvage of archeological sites differs from state to state (the Abandoned Shipwreck Act of 1987), but the removal of artifacts can result not only in irreparable damage to these unique, often one-of-a kind archeological sites, but also removes important evidence from regionally and internationally important events and can diminish our ability to learn more about our very direct connection to history. With archeological sites that also serve as unintentional memorials, this type of activity has been compared to grave-robbing. U.S. military archeological sites such as USS Westfield and USS Hatteras, both lost in the Galveston area in 1863, and the USS Houston offshore Indonesia are still considered property of the U.S. government. Watercraft, aircraft, and other vehicles in underwater environments throughout the world are protected by the Sunken Military Craft Act under the purview of the Naval History and Heritage Command.

Detecting and protecting these sites from looting and vandalism contributes to long-term preservation of important cultural resources and greater opportunities to both learn and share their impacts on our history. For important wartime losses such as USS Houston, these shipwrecks are symbols that testify to those who have served and sacrificed in service of their country.