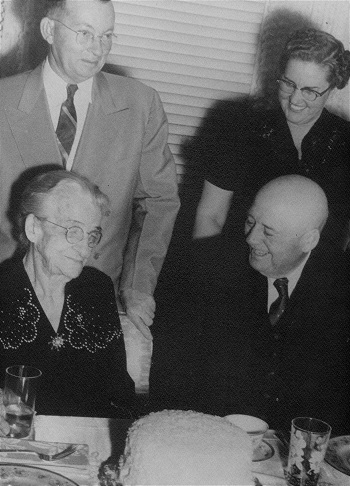 Sam Rayburn was born in Roane County, Tennessee on January 6, 1882. In honor of “Mr. Sam’s” birthday, the Sam Rayburn House State Historic Site hosted a birthday party for the late Speaker of the House on Saturday, January 6 and everyone was invited.

The theme for Sam Rayburn Day was events that took place during World War I. The Sam Rayburn House continues its look back 100 years into the past, with events occurring on the Rayburn farm and events happening internationally. The year 2018 marks the centennial of the signing of the Armistice with Germany, thereby ending the war.

Visitors to the site on Sam Rayburn Day enjoyed World War I-era treats made with limited quantities of sugar and flour, very similar to what families on the home front made during the years of 1917-18. Some of today’s favorite treats that can be found on store shelves were brought to market just before World War I. Oreos, Lorna Doone cookies, and animal crackers were all available for tasting during the birthday party. What birthday party is complete without birthday cake? Visitors enjoyed a slice of Sam Rayburn’s favorite birthday dessert: coconut cake. Those who weren’t craving sweets were invited to try one of Mr. Sam’s favorite meals and a cold weather staple for Texans: chili.

Guided tours of the Rayburn home included facts and figures about World War I. When discussing the Rayburn’s bathroom and the family having running water in their home beginning in 1917, we mentioned the importance of handwashing and its prevention of spreading the flu. The Spanish Flu epidemic killed more people worldwide than died in battle during the First World War. In the Rayburn’s guest bedroom, we looked at some delicate ladies’ linen handkerchiefs. We compared those to disposable tissues, a product developed shortly after the war from cellucotton bandages used by Red Cross nurses. In the bedrooms of Sam and his brother Tom, we discussed the Rayburn men signing up for the draft during the war, though none were actually enlisted into military service.

The Sam Rayburn House State Historic Site tells the real story of Sam Rayburn, one of the most powerful and influential politicians of the 20th century, in his authentic 1916 home. Preserved as a period time capsule, the two-story home contains all original Rayburn furnishings. The Sam Rayburn House State Historic Site is one of 22 historic attractions operated by the Texas Historical Commission. For more information go to www.visitsamrayburnhouse.com. To learn more about the role of Texans during WWI, check out the Texas and the Great War Travel Guide.