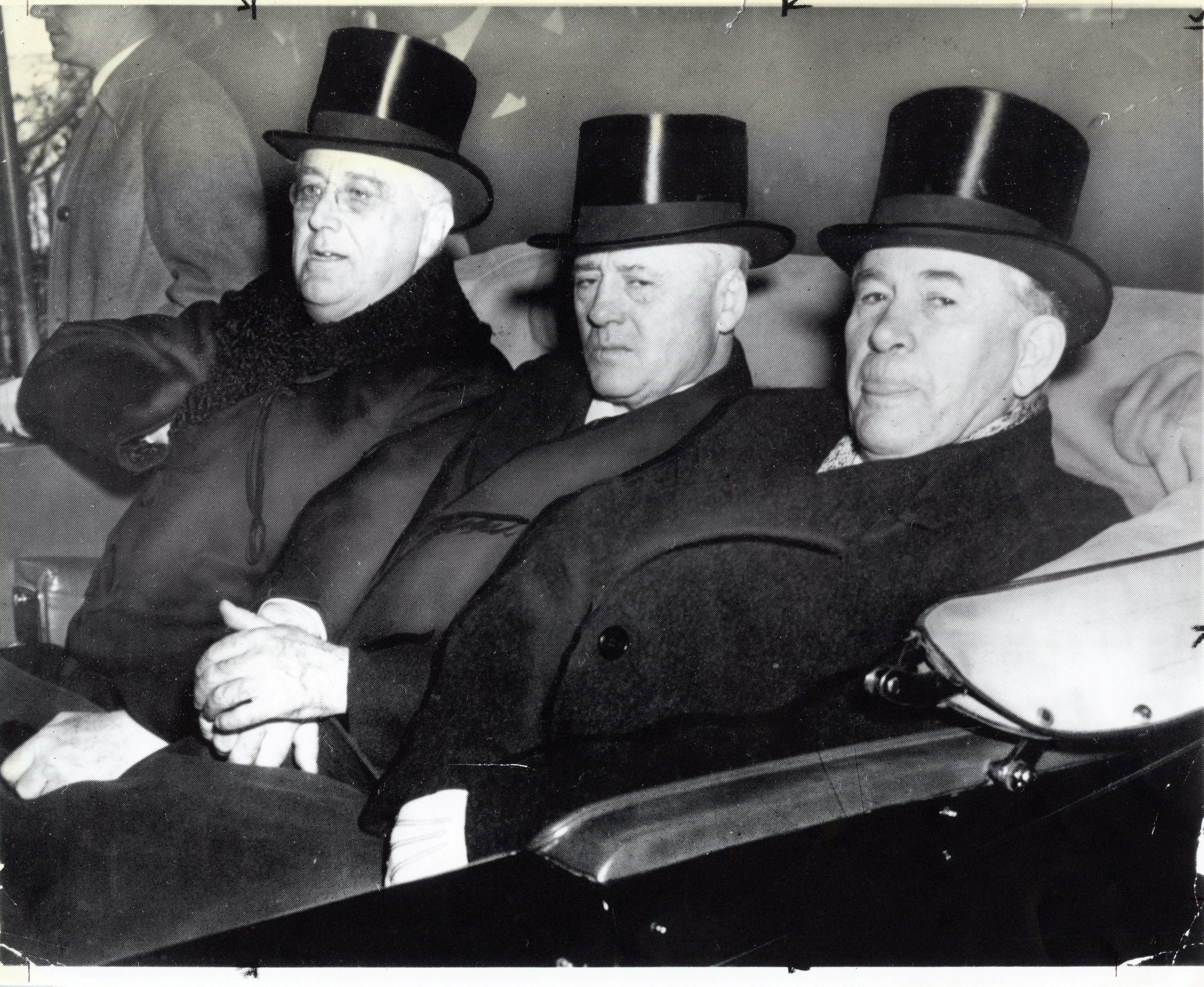 Sam “Mr. Sam” Rayburn was alive just 61 years ago. To some people, that may seem akin to a million years ago, but historically speaking, it’s just a blip on a very large radar. That’s such a short while ago, really, that some visitors to the Sam Rayburn House State Historic Site share personal stories about Mr. Sam with us.

Now, because we can’t check the validity of certain stories, we can’t share them with others. And of course, some stories are closer to rumor and hearsay. No matter how fun those stories may be, we’d really need an eyewitness account from someone who was there rather than some secondhand sharing.

We have oral histories in our records that we use as part of our interpretation of Sam Rayburn and his family. Many of these oral histories were recorded during the 1970s and 1980s with friends and family who knew the Rayburns best, so we can use the things these people said as a basis for facts that we might verify with other sources. But frankly, rather than get into a deep philosophical discussion about what “truth” is or me writing a short paper with an additional 20 pages of bibliography to show you all I really checked my sources, I just want to share a story from one of these oral histories with you.

A 19-year-old Mary Allen Wilshire moved to Bonham with her husband, who was a football coach, in 1943. Young Mary was very sick, pregnant, and confined to Allen Memorial Hospital in Bonham where it seemed that no one was taking care of her. Mary said that although she was sick, “I was determined not to scream or holler, when I looked up to see this beautiful, sweet, friendly woman at the end of my bed. She said, ‘I don’t know you, darling, but if there’s anything I can do for you, I will.’ Of course, one couldn’t help but be friends with somebody like that.” 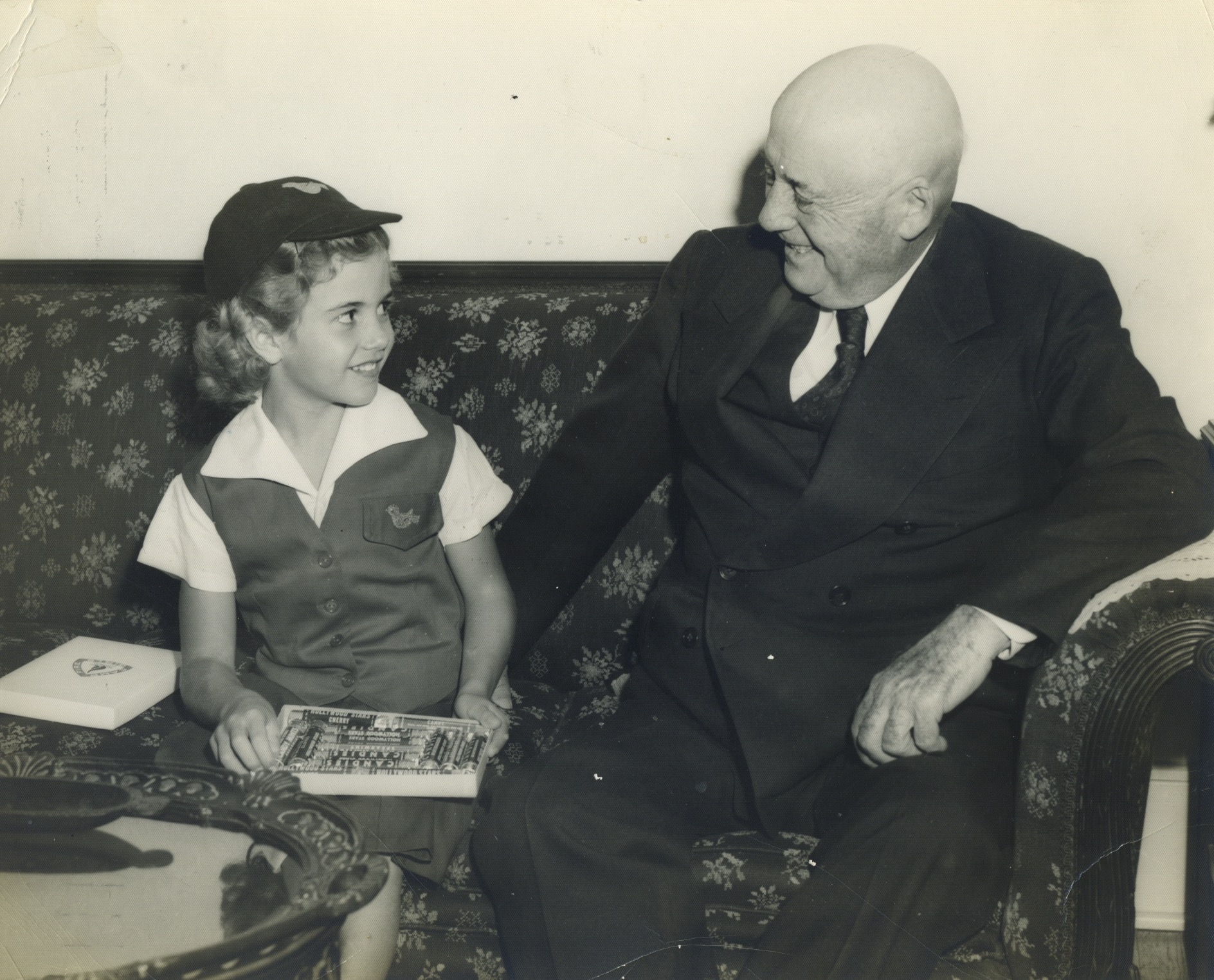 The person Mary met that day was Medibel Bartley, Mr. Sam’s sister. That began Mary’s relationship with the Rayburn family, which allowed us to learn the story of the December 1958 Bonham Christmas parade, an ill Parade Marshall Sam Rayburn, and 10 young Bluebirds who fully expected to ride with Mr. Sam on a parade float. “Bluebirds” was the term for young girls (under age 12) just starting off in the Camp Fire Girl (now Camp Fire) organization. Their uniform, according to Mary, consisted of “little navy-blue skirts and little white shirts and buttoned blue vests. The way you know for sure that it’s a Bluebird is the fact that they wear little blue beanies with embroidered bluebirds on them.”

The Sam Rayburn Library Museum and the Briscoe Center for American History at the University of Texas at Austin provided us with a photograph of Sam Rayburn in 1950 buying candy from Elaine Crider in her Bluebird uniform so that we can better picture a human Bluebird.

Mary said of the Bluebirds:

They were washed, they were starched, their hair was curled, and their shoes were shined. They had been told that they would ride in a Christmas float with Mr. Sam, and they were ready. Their parents were just as proud of the fact as they were. This lower part of the little organization was extremely excited. The older girls were to have decorated the Christmas float and had done it. But the weather was terrible! The parade was not cancelled because everyone was expecting Santa Claus. Mr. Rayburn said that he was not able to ride on a float because he’d been fighting a terrific chest cold. He felt being out that long and being exposed to the air would make him sick. I’m sure that was a very wise decision, but you know it’s hard to explain things like that to children, so he said, “I’ll ride in the car.”

Mrs. John Bowman, the Camp Fire leader who Mary described as having “just a little bit more backbone than the rest of us mothers,” asked Mr. Sam what the Bluebirds were supposed to do now that they couldn’t ride on the float. Mary stated that Mr. Sam “thought for just a minute and then sort of rallied and came to himself a little bit. He was most gallant and said, ‘Well, let them ride with me.’ The mistake in that was that Mr. Rayburn didn’t realize how many Bluebirds we had.”

Ten little bluebird children and their mothers proceeded to a big black car. H.G. Dulaney, a worker of Mr. Sam’s and later the first director of the Sam Rayburn Library, sat in the driver’s seat and Mr. Sam in the passenger seat.

We began putting Bluebirds in the back seat. We got four in. Then we put four more on top of them. Then we put a Bluebird in the middle, between Mr. Dulaney and Mr. Rayburn, then a Bluebird on the other side of Mr. Rayburn. We had nine in the car. Well, Mr. Rayburn’s patience was really wearing thin by then, with little girls talking and pushing, crowding and laughing. We thought they were all in, but there was this darling little girl – little bitty – who wouldn’t have caused any trouble, and there was no place for her. So Mr. Rayburn said, “There’s just not room for any more.” This little Bluebird said, “There is too. I could ride on your lap.” Well, I don’t think anybody could have turned her down, and she did ride on his lap. To wind this story up, they were in the parade. The windows were down, and Mr. Sam had as much opportunity to take cold as he would have had on the float.

The Bluebirds were dropped off in front of Santa Claus’ float after the parade. Mary Wilshire named the 10 girls who filled up the car: Pam Butler, Reta Lowery, Heidi Bowman, Alicia Acree, Melody Terry, Susan Doan, Cheryl Gard, Patricia “Pat” George, Pat Martin (who sat on Mr. Sam’s lap), and Mary Lou Wilshire. There was one absent Bluebird by the name of Carmen Cole, the daughter of Buster Cole. However, Carmen’s father was a close friend and associate of Mr. Sam, so she probably had a stronger connection to him than the other Bluebirds anyway. Mary wanted to mention each of the girls because they all “went on to win the highest award in Camp Fire, which was called the Wohelo Medallion,” and they also helped build some of the first cabins at Bonham’s Camp Fire Camp for the Camp Fire association.

Also, in her telling of the story, there were already 10 Bluebirds in the car before she got to the little girl who sat on Mr. Sam’s lap. She probably counted the one sitting between H.G. Dulaney and Mr. Sam twice, but sometimes in oral histories, it’s not really the details that matter. It’s the impression that the memories leave.

Mary Wilshire founded the Wilshire Furniture Company with her husband and in-laws. She also taught high school English and was chosen as Bonham’s Woman of the Year at one point. She provided an oral history interview about the Rayburn family at the Sam Rayburn House in October 1974.

The oral histories we have in our collection feature stories such as this one, little things that may not make it into history books but that provide a glimpse into everyday situations that capture an aspect of someone’s character. It’s tempting to want to only share the good stories or the stories that may make someone, like Sam Rayburn, appear good and honorable and grand all the time – but someone like that has not and will never exist.

And not every story has to have a point. For all that we can talk about the things Mr. Sam did or didn’t do for the American people in Congress, or for the “important” people that he met throughout his lifetime, it’s nice to have stories that simply show a man at the edge of sanity at a local parade.