Medibel Rayburn Bartley was born on December 18, 1879. She, along with her parents, seven brothers, and two sisters, moved from their home in Roane County, Tenn. in 1887 to Flag Springs, Texas. In 1902 at age 23, Medibel married Samuel Edward Bartley of Ladonia, who was 22 at the time.

The Bartleys made their home in Ladonia, and welcomed a baby boy on August 11, 1906. They named their son William Rayburn Bartley, quickly nicknamed “Rayburn” by the family. Young Rayburn had a habit of “writing” notes to his Rayburn aunts and uncles and they, too, responded with many notes and postcards addressed to “Master William Rayburn.” One of the last notes likely ever written to Rayburn was from his uncle Tom Rayburn on May 1, 1908. Tom wrote the youngster, “Can you talk yet?”

A shadow was cast over the Bartley home on June 12, 1908, the day that the not-yet-2-year-old William Rayburn Bartley passed away. The child died of diphtheria, a very serious and contagious disease of the early 20th century, which has since been made preventable through vaccination.

While we do not know the specifics of the child’s illness or death, we do know that word spread quickly among the Bartley’s friends and family. Condolence letters and notes poured in to the Bartley household. Cousin Kate Kincaid wrote, “I realize that this letter will find you both in the deepest sorrow at the loss of your darling little boy, and that words will fail to assuage your grief. Yet, I feel that I want you to know that I’m thinking of you both in your loss of little Rayburn.”

Friend Mary L. Edge wrote, “Those of us who knew Rayburn so slightly loved him devotedly and shall miss his dear little face sorely. Then oh! How much deeper shall be the grief that you endure who loved him more and above every earthly joy.”

William Rayburn Bartley was buried in the Ladonia Cemetery. Both his parents, S.E. Bartley and Medibel Bartley, were also buried there upon their deaths in 1948 and 1969, respectively.

In 1909, the Bartleys were blessed once again with a son. On May 20, 1909, they welcomed Robert Taylor Bartley to the world. Robert or “Bob” Bartley grew up in Ladonia, Dallas, and Bonham. In a 1973 interview, Bob Bartley said of the loss of the brother he never knew, “I always felt the lack of a brother, and my mother, I think, never really got over it." 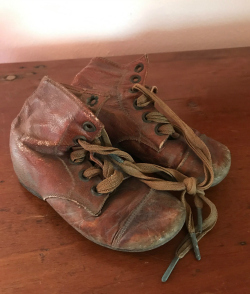 S.E. and Medibel Bartley moved into Sam Rayburn’s Bonham home in 1943 to help with management and caretaking of the property. After Medibel died in 1969 and the house transferred to the Texas Historical Commission in 1971, an aged pair of brown leather baby shoes was found among her personal possessions. The shoes measure just 5 1/8” in length, making them an appropriate size for a toddler. They are made from “kid” leather, or goatskin, a softer, more pliable leather. Obvious signs of use include the scuffs on the toes and wear to the laces. Dirt is still stuck to the bottom of the right shoe. Was the child that owned these shoes last playing in the mud before they were tucked away in Medibel Bartley’s mementoes? Was this child William Rayburn Bartley? Without written documentation, we cannot be sure, but this seems highly likely since the shoes fit the age of young “Rayburn” and the year, 1908, when he passed away. They might have been saved for sentimental reasons by his mother.

The lace-up leather ankle boots or shoes were a popular style for children at the turn of the 20th century. Sears Roebuck catalogs from 1902 and 1908 show a myriad of similar, almost identical styles, though at that time there were very few options for children. A pair found in the 1908 Sears, Roebuck and Co. catalog would cost $0.74 (over $20 in 2017, figuring for inflation).