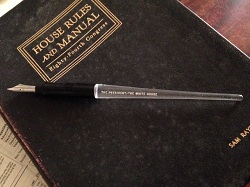 Sam Rayburn’s nearly 50-year tenure in the U.S. House of Representatives saw eight different presidential administrations, from Woodrow Wilson to John F. Kennedy. As a young Congressman early in his career, “Mr. Sam” did not work closely with the president, but as his career progressed and his influence increased, he and the president had closer ties.

Sam Rayburn House State Historic Site's collection contains two Esterbrook-made pens with nibs numbered 2668 and translucent handles on which is imprinted in white paint, “THE PRESIDENT–THE WHITE HOUSE.” (A nib is the pointed metal part of a pen that distributes the ink.) One of these pens can be found atop “Mr. Sam’s” desk in the sitting room. This model of Esterbrook pen has an illustrious history and harkens to an unusual presidential tradition.

When a bill has passed both houses of Congress and the president has decided to sign it into law, a signing ceremony might be held during which the president will sign his name on the bill and complete its journey. Especially for landmark legislation, the pens used by the president to sign a bill are often given away as souvenirs and thank-you gifts. The president will generally gift the signing pen to people who proved instrumental to the creation and passage of the bill. 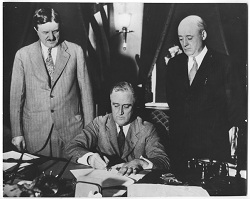 Because these pens are often given away as gifts, presidents since Franklin Roosevelt have taken up the tradition of using multiple pens to sign their name on bills. Although the end result of this practice can be a rather messy signature, the president will then have many pens to gift. For example, Dwight D. Eisenhower used 12 pens to sign the Alaska Statehood Act on July 7, 1958. Lyndon Baines Johnson purportedly used at least 75 pens to sign the Civil Rights Act of 1964, and gifted one of these pens to Martin Luther King, Jr. More recently, Barack Obama used 22 pens to sign the Patient Protection and Affordable Care Act on March 3, 2010.

However, not all presidents adhere to this tradition. George W. Bush would generally use only one pen to sign bills, and gave away new pens as thank you gifts instead of using multiple pens to sign a bill. Presidents also do not hold a formal signing ceremony for every bill.

The particular model of Esterbrook pens with the 2668 nib found in the Sam Rayburn House collection was used during the presidencies of Harry Truman, Eisenhower, Kennedy, and Johnson. This type of pen was used to sign several important and famous acts in the 1950s and 1960s, such as the Alaska Statehood Act (1958), the National Aeronautics and Space Act (1958), the Equal Pay Act of 1963, the Civil Rights Act of 1964, the Voting Rights Act of 1965, and the amendments to the Social Security Act, which established Medicare and Medicaid in 1965. Notably, this Esterbrook model was also used by Kennedy to sign the joint resolution that awarded the Congressional Gold Medal posthumously to Sam Rayburn in 1962.

Because “Mr. Sam” attended many bill signings during his career, it’s impossible to determine which bills, if any, the collection’s Esterbrook pens were used to sign. These pens may have originated during the Truman administration, as Rayburn and Truman enjoyed a particularly close friendship. Although “Mr. Sam” had a more strained relationship with Eisenhower, he still attended bill signing ceremonies during the Eisenhower administration, including the Alaska Statehood Act signing, where Rayburn received one of the 12 pens used to sign the bill. This pen is on display in the Sam Rayburn Museum, also located in Bonham. Although Rayburn died a few months into Kennedy’s presidency, he still attended ceremonies until his death in 1961.

In recent times, the particular model of pen used by the president has changed, but the tradition of using many pens to sign a bill continues. The Esterbrook pens at the Rayburn house demonstrate “Mr. Sam’s” importance as a legislator and a voice in Washington, as well as his ties to the several presidents with whom he worked.