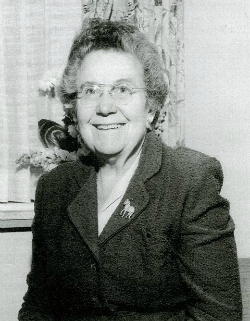 In honor of Women’s History Month, our March artifact of the month highlights the fireplace bellows located in the sitting room of the Sam Rayburn House. The bellows were a gift from one of the most important women in Sam Rayburn’s political life: his secretary of 42 years, Alla Clary.

Clary was born on August 26, 1889 in McKinney, and was raised on a farm outside of town. From a young age, she was interested in politics and government. She attended school at North Texas State Normal School (now the University of North Texas) in Denton between 1907 and 1909. Later, she taught school in the North Texas area for eight years. She then took a Civil Service exam and accepted an appointment in Washington, D.C. with the War Department, where she began working in July 1918. It was at this time that she met Sam Rayburn, her state representative. Near the end of 1918, Clary decided to leave her job, as she found the work to be dull and repetitive. She visited Mr. Sam’s office to say goodbye, and a week later received a phone call with a job offer to work with Rayburn as his secretary. Clary accepted the job and went to work for Mr. Sam in October 1919.

She would remain in her position as Rayburn’s secretary until his death in 1961, and during her time as his secretary, she was fiercely protective of Mr. Sam. She took issue with anyone who called Mr. Sam cantankerous and often asserted that he was the “greatest.” In 1956, the feisty secretary was even listed among the “Six Most Fascinating Women in Washington” by columnist George Dixon. In the midst of the 1956 election, she visited the White House and parked a car in the driveway displaying a sticker of support for Adlai Stevenson, the Democratic presidential nominee against President Eisenhower. When many proclaimed that the Congressional session of 1958 would be one of the busiest and most challenging sessions in history, she simply countered that those claims were made every year.

When asked why she never married, Clary responded that she didn’t have the time, and once stated that she never worried about getting old. When she wasn’t in Washington, she was traveling. Her trips took her across the globe, including to Mexico, Canada, China, Japan, Thailand, most of Western Europe, Turkey, Central America, and the West Indies. She visited nearly all 50 states, and numerous national parks. Never forgetting her roots, she also frequently traveled home to Texas to visit family. After Rayburn’s death, she moved to Falls Church, Va., where she died on May 9, 1977. 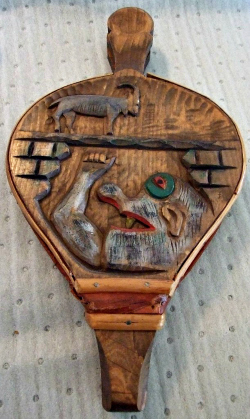 The fireplace bellows at the Sam Rayburn House are from Mexico, a souvenir from one of Clary’s numerous trips. Fireplace bellows are typically used to stoke a flame by taking in air and then forcefully pushing it out directly onto a fire. The bellows at the Rayburn House are made of wood and leather, with a scene carved and painted on the front panel. The scene depicts a rather ugly troll with a green and red eye underneath a bridge, shaking his fist at a goat on top of the bridge, reminiscent of the story of the Three Billy Goats Gruff. The bellows serves as a reminder of the long friendship between Mr. Sam and his longtime secretary, as well as a fitting tribute to Clary’s fiery nature.