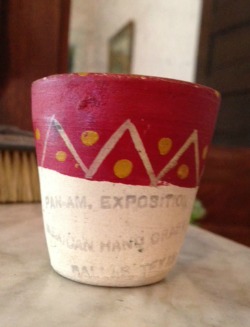 The souvenir cup that rests on a bureau in the room that housed Medibel Bartley, Mr. Sam’s sister and the last of the Rayburn residents in the house, is rather inconspicuously placed atop the right-hand drawer amongst other miscellaneous items. It’s a modest piece, a small ceramic cup no bigger than a stout shot glass, more similar to a tiny flower pot in heft and form. Its adornment is simple—a basic chevron and dot pattern over a red base on the upper half of the piece—which leaves room for the stamped words “PAN AM EXPOSITION,” “MEXICAN HANDCRAFT,” and “DALLAS, TX” on the unglazed base.

The Greater Texas and Pan-American Exposition was a World’s Fair hosted in Dallas from June 12 through October in 1937, a 4 1/2-month-long event that boasted attendees and participants from 21 countries in the Western Hemisphere. A year before, the 1936 Texas Centennial Exposition celebrated 100 years since Texas had obtained its independence from Mexico. A huge success, the Centennial Exposition inspired a repeat performance in the form of the 1937 Pan-Am Exposition. Among those who assisted in bringing the 1937 Exposition to fruition was Sam Rayburn, who helped speed up the process of guaranteeing that Pan-American guest countries would be able to attend.

The 1937 Pan-Am Exposition managed to save money by reusing the buildings constructed by the Texas Centennial Exposition. All but one of the original 50 buildings were still standing and were ready to host the crowds of domestic and international guests. Some of the events and activities they housed included: “The Cavalcade of the Americas” and “The Road to Rio,” which theatrically presented “the discovery and development of the two American continents;” ice skating demonstrations that could be viewed while dining outdoors; classic carnival activities such as Ferris wheels, shooting galleries, tunnel rides, and more; stands where artisanal works and souvenirs from the visiting and hosting countries were sold; and the first (although not historically counted) Pan-American Games.

Initially named the Pan-American Olympics in 1937, the Pan-American Games is an event that’s lasted to this day. Only three sports were featured the first year—boxing, track and field, and soccer—and it captured relatively little attention at the Expo. However, the Pan-American Games grew and began occurring every four years in the months before the Summer Olympics. It now hosts 36 sports, nearly 400 events, and more than 5,000 competitors in countries from the American continents, and is counted among the largest multi-sport events in the world.

There are no records in the Sam Rayburn House collection that indicate when the family might have visited the Exposition—or, in fact, if they visited at all. The cup might have been one of many souvenirs they brought home from the event, or it might have been a gift from friends or extended family who attended. But regardless of the specifics of when and how the cup was obtained, we know the most important piece of information available: the tie between the Rayburns and the modern marvel that was the Greater Texas and Pan-American Exposition.