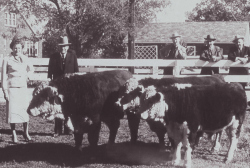 Raising Herefords wasn’t initially part of Rayburn’s 1916 farm. He and his family actually raised Jersey cattle. Sam’s brother Tom, who acted as the farm’s manager, milked the cattle twice daily with hired help. Rayburn prized the cattle for the high butterfat content of their milk and their sweet disposition.

In the 1930s and 1940s, Sam Rayburn began raising Polled Herefords, who are hornless cattle raised for beef production. He saw that the beef cattle business was more profitable and less labor intensive than raising milk cows. This trend of moving from milk cattle to beef was common in East Texas due to both soil depletion and a shortage in the workforce during World War II.

Rayburn’s initial investment into the Hereford breed was the purchase of 12 cows and one bull from the Johnson Ranch in Jacksboro, which at the time had the most registered Polled Herefords in the world. At the height of his production, Rayburn owned 150 cow-calf pairs of Herefords. The majority of the Hereford cattle were kept at pasture at Rayburn’s ranch in Ivanhoe. A few were pastured at his Bonham farm. The cattle were rotated between the two properties at breeding season by the ranch foreman, James “Buck” Henson.

The majority of Rayburn’s Herefords were registered. The farm crew would tattoo the calves, assigning them a number and name. Rayburn’s sister-in-law, Loyce Rayburn, was in charge of filling out and submitting the paperwork for the cattle registry.

Cattle registered with a particular breed association tend to bring more money to the owner. Registration paperwork can tell the history of a cow or bull such as its sire and dam, date of birth, owner, and breeder. These cattle may also be allowed entry into specific cattle breed shows. The show ring can bring more awareness to a breeder or ranch and his or her stock of animals, which then may in turn bring a higher price for the animals at sale or for the animal’s progeny. 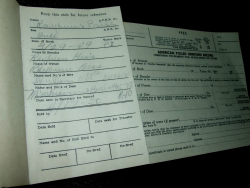 The American Polled Hereford Record registry book, which Loyce Rayburn used for reporting new calves on the ranch, now sits on top of “Mr. Sam’s” desk in his bedroom. Many of the pages have already been filled out and submitted with the stubs left for reference. The entries in the stubs are dated for bull and cow calves that were born in 1948 and 1949. The top stub lists a bull born on March 29, 1949 named “Rayburn’s Pride.” Other calf names include “Prince Rayburn,” “Papa Jim,” perhaps in honor of Sam’s brother James “Jim” Rayburn, and “Doctor R.,” likely in honor of Sam’s brother, Dr. John Rayburn, who died in 1928.